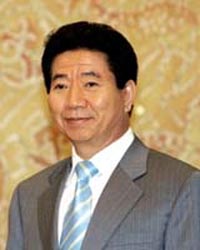 Pyongyang committed at separate nuclear negotiations to disable its main reactor by the end of the year. The first summit between two Koreas left south pleased.

In an agreement between the U.S. and regional powers at China-hosted arms talks, the North also said it would also give a "complete and correct declaration" of all its nuclear programs by Dec. 31, Chinese Vice Foreign Minister Wu Dawei said in Beijing.

The move would be the furthest North Korea has gone to scale back its nuclear ambitions after decades seeking to develop the world's deadliest weapons.

Previously, the North had only frozen its arms programs under a 1994 deal with the U.S. But it quickly restarted production of weapons-grade plutonium at its main nuclear complex after the beginning of the latest atomic standoff in 2002, leading to its first-ever test nuclear explosion in October 2006.

Pyongyang shut down its sole operating reactor at Yongbyon in July after the U.S. reversed its hard-line policy against the regime, the first tangible progress from years of talks that also include China, Japan, Russia and South Korea.

Earlier Wednesday at the summit between leaders of the North and South, South Korean President Roh Moo-hyun said he was "satisfied with the outcome of the talks," his spokesman Cheon Ho-seon told the reporters in taped comments relayed from Pyongyang.

The sides were to draft an agreement by Thursday morning, Cheon said.

Roh "raised almost all agenda items that we have brought" and "there has been progress in every sector, such as establishing peace on the Korean peninsula, economic cooperation, reconciliation and cooperation," the spokesman said.

There were no details on what the agreement would include. South Korean officials had repeatedly refused before heading to Pyongyang to give any specifics of what they sought at the meeting beyond vague talk about bolstering "peace and prosperity" on the peninsula.

The comments came after Roh and Kim held nearly four hours of talks Wednesday at the second-ever summit between leaders of the North and South.

Kim proposed at one point during the meeting to extend the summit for another day but later withdrew the offer, saying there had been sufficient discussion between the sides. It was not clear whether Roh rejected the offer first or if Kim took it back on his own.

"As we had enough dialogue, we don't need to extend" the summit, Kim said, according to South Korean pool reports. The leaders shook hands at the end of their meetings, both appearing cheerful in video relayed from Pyongyang.

Roh said he had sought common ground with Kim at the talks.

"We didn't reach consensus on everything. There were parts on which our perceptions coincided, and there were other parts" on which the perceptions didn't coincide, Roh said at a luncheon with the South Korean delegation during a pause in the summit.

"However, what I clearly confirmed is that (Kim) has a firm will about peace and there was consensus that there should be an agreement this time that presents a future direction about peace," Roh said.

Roh acknowledged that the North, one of the world's most isolated nations, was taking a cautious approach in opening up to its capitalist neighbor.

"North Korea still has some skepticism about the South, and doesn't trust it enough," Roh told the luncheon. "We have to make more efforts to further tear down this wall of distrust."

He also said the North expressed regret that the international standoff over its nuclear weapons programs had prevented greater economic cooperation with the South.

As the summit started Wednesday, Roh and Kim briefly mentioned recent floods in the North that left about 600 people dead or missing and tens of thousands homeless and prompted North Korea to delay the summit from its original August date.

Before the talks at a state guesthouse in Pyongyang, Roh presented the North Korean leader with gifts including a bookcase full of South Korean DVDs, featuring popular soap operas and productions starring Lee Young-ae, believed to be Kim's favorite starlet.

Kim appeared animated and smiled repeatedly Wednesday as he greeted Roh - a contrast from his dour demeanor Tuesday, when the two first met briefly at an outdoor welcoming ceremony after the South Korean president arrived by road in Pyongyang.

Roh was slated to view an evening performance of the North Korean propaganda spectacle known as the "mass games." Such shows feature thousands of synchronized gymnasts, and a giant mural formed by children turning colored pages of books.

Conservatives have criticized Roh for going to the show, which extols the purported virtues of the North's communist regime.