The US adminitration is expecting an agreement during the upcoming days regarding the plan to disable North Korea's nuclear facilities by the end of the current year. US officials tressed that what counts was whether the North agreed to give up its nuclear weapons and the fissile material to make them. 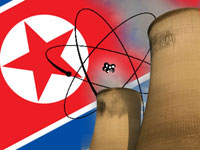 U.S. Assistant Secretary of State Christopher Hill, the top U.S. nuclear negotiation with North Korea, told a news conference that President George W. Bush agreed to a joint statement proposed by China at the end of six-party talks last weekend on plans for disabling the North Korean nuclear reactor at Yongbyon and achieving a full description of the North's nuclear program.

He told a news conference Tuesday at the Foreign Press Center that he expects the five other parties - China, Japan, Russia, North Korea and South Korea - to sign on to the joint statement, which should be released in Beijing in the next few days.

While refusing to give details, Hill said the proposed joint statement will set a timetable for getting through the process of obtaining a full nuclear declaration from the North and disabling its nuclear facilities by the end of the year.

North Korea is required to disable its sole functioning reactor at Yongbyon in exchange for economic aid and political concessions under a February deal reached through the six-party talks. In July, the North closed Yongbyon, as well as other facilities, ahead of their disablement.

Once there is a six-party agreement, Hill said, the U.S. expects the process of disabling the reactor to get under way "in a matter of weeks."

The United States wants the dismantling process so thorough that a nuclear facility could not be made operational for at least 12 months.

"We will then be able to move to what we hope will be a final phase," Hill said. "That is in the calendar year 2008 which will deal with the actual abandonment of the fissile material."

Next year, he said, the U.S. would also like to see creation of "a peace mechanism" on the Korean peninsula by the directly affected parties, and the establishment of a northeast Asia peace and security forum.

Hill said the North - officially the Democratic People's Republic of Korea or DPRK - has about 50 kilograms of fissile material harvested from the nuclear reactor at Yongbyon, and will have to declare exactly how much. The United States also wants to resolve concerns about the North's uranium enrichment program, he said.

The 50 kilograms of fissile material and the North's nuclear weapons are key issues, Hill said.

"I have to make sure the DPRK understands that they've got to give up the fissile material and the weapons," he said, and that means talking to the army and likely dealing with some people who don't want to take "that very necessary last step."

"So that's what I worry about, because if we don't get that last step, we don't have a process," Hill said. "We can't get anything done unless there is denuclearization."

Hill also stressed the importance of continuing the North Korea-U.S. dialogue but more importantly the Japan-North Korea dialogue "because I think the DPRK's future in the region of northeast Asia depends on a very good and improving ... relationship with Japan."

Negotiators have been seeking to close a gap between what Washington wants and what North Korea's reclusive hard-line communist government says it is willing to do.

North Korea reportedly wanted the joint statement to include a written reference to its goal of being removed from a U.S. list of countries that sponsor terrorism. Hill indicated that is possible, but only after North Korea has lived up to its commitments.