Japan to cut back on aid to Myanmar

Japan, Myanmar's biggest aid donor, is considering cutting back its donations to protest the death of a Japanese journalist during pro-democracy demonstrations in Yangon, the foreign minister said Wednesday. 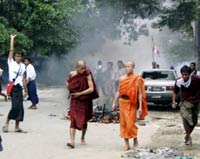 Japan to cut back on aid to Myanmar

Foreign Minister Masahiko Komura said Japan was preparing to suspend aid to Myanmar in protest over the death of Kenji Nagai during last week's military crackdown on street protests in Yangon despite repeated international calls to end repression.

"There have been calls to freeze aid entirely, but ordinary people in that country are already suffering. So we've decided to narrow down humanitarian aid for now," Komura told a group of reporters.

Japan has already limited its economic aid to Mynamar to humanitarian assistance, and is now "considering cutting it back further," Komura said.

Purely humanitarian assistance that directly affects the Myanmar public, including polio vaccination, should continue, but Japan is likely to freeze other projects such as human resource centers, he said.

Nagai's body was expected to be returned home Thursday and sent to policy for autopsy to determine the cause of his death, Komura said.

Komura said the decision to scale back aid to Myanmar was made "comprehensively" based on the outcome of his own meeting with his counterpart Nyan Win in New York and Yabunaka's visit to Myanmar, where officials defended the crackdown as necessary to maintain order.

Japanese officials have said Nagai was clearly shot at close range, not hit by stray bullets as Myanmar officials had earlier explained, and demanded the return of the journalist's video camera and tapes believed to have captured the shooting.

Video broadcasts, including one released by Japan's Fuji Television Network, appeared to show a soldier shooting Nagai at point-blank range.

Japan is Myanmar's largest aid donor. It suspended yen-denominated loans for major projects after another violent crackdown in 1988, but has since given aid under a program focused mainly on health, education and humanitarian projects.