The founder of Blackwater USA is looking forward to telling his side of the story to members of Congress who labeled his private security firm an out-of-control outfit indifferent to Iraqi civilian casualties. 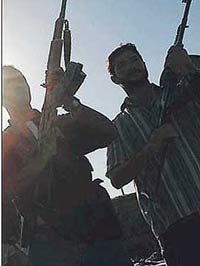 The prominent firm, which has been paid more than $1 billion (EUR700 million) in federal contracts since 2001, is embroiled in a host of controversies over the conduct of its guards that have prompted some Iraqis to demand its expulsion.

Blackwater's 38-year-old founder and chairman, Erik Prince, will be one of the witnesses Tuesday as the House of Representatives Oversight and Government Reform Committee holds a hearing into private security contracting.

"We look forward to setting the record straight on this issue and others tomorrow when Erik Prince testifies before the committee," Blackwater spokeswoman Anne Tyrrell said Monday.

On Monday, the FBI opened an investigation of the latest fatal shootings in Baghdad involving Blackwater guards, and the House committee issued a scathing 15-page report on the company's conduct.

Among its most serious charges is that Blackwater contractors sought to cover up a June 2005 shooting of an Iraqi man, and the company paid, with State Department approval, the families of others inadvertently killed by its guards.

Blackwater has had to fire 122 guards, one-seventh of the personnel it has in Iraq, over the past three years for problems ranging from misuse of weapons, alcohol and drug violations, inappropriate conduct and violent behavior, the committee report said.

The FBI is sending a team to Iraq to investigate a Sept. 16 incident that angered the Iraqi government.

On that day, 11 Iraqis were killed in a shootout involving Blackwater guards protecting a U.S. diplomatic convoy in Baghdad. Blackwater says its guards acted in self-defense after the convoy came under attack. Iraqi witnesses have said the shooting was unprovoked.

The FBI team was requested by the State Department, and its findings will be reviewed for possible criminal liability.

The large percentage of Blackwater personnel in Iraq that have been fired raises questions about the quality of the people working for the company.

The only punishment for those dismissed was termination of their contracts with Blackwater, says the report, which uses information from Blackwater's own files and State Department records.

The report, prepared by the majority staff of the committee, also says Blackwater has been involved in 195 shooting incidents since 2005, or roughly 1 1/2 per week.

In more than 80 percent of the incidents, called "escalation of force," Blackwater's guards fired the first shots even though the company's contract with the State Department would have it use defensive force only, it said.

"In the vast majority of instances in which Blackwater fired shots, Blackwater is firing from a moving vehicle and does not remain at the scene to determine if the shots resulted in casualties," according to the report.

The staff report says Blackwater has made huge sums of money despite its questionable performance in Iraq, where Blackwater guards provide protective services for U.S. diplomatic personnel.

Blackwater has earned more than $1 billion (EUR700 million) from federal contracts since 2001, when it had less than $1 million (EUR700,000) in government work. Overall, the State Department paid Blackwater more than $832 million (EUR584.6 million) between 2004 and 2006 for security work, according to the report.

Blackwater bills the U.S. government $1,222 (Ђ860) per day for a single "protective security specialist," the report says. That works out to $445,891 (EUR313,300) on an annual basis, far higher than it would cost the military to provide the same service.

Blackwater, founded in 1997, is the largest of the State Department's three private security contractors. The others are Dyncorp and Triple Canopy.

According to the report, Blackwater has had more shooting incidents than the other two companies combined.

The report is critical not only of Blackwater. In two cases, the State Department