Spain's prime minister was to meet with the president of the European Commission on Monday to discuss the bloc's drive for a constitutional treaty, a unified energy market and better efforts to fight illegal immigration from Africa. 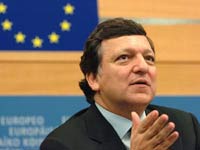 EU commission president Jose Manuel Barroso was in Madrid to attend a conference on the European energy sector.

Earlier this month the commission unveiled a proposal that would force European energy generators to give up their pipelines and transmission networks as a step toward uniting the continent's patchwork of gas and electric systems.

Barroso and Prime Minister Jose Luis Rodriguez Zapatero were also to discuss the EU's reform treaty, which would replace the draft constitution rejected by French and Dutch voters in 2005, effectively stalling the project.

The Spanish leader will also thank the EU for instituting Frontex, an agency that deploys ships and aircraft off the coast of Africa to deter illegal immigration, but will press for more resources, Zapatero's office said.