Parliamentary elections in Ukraine save yet another orange intrigue

Ukraine is electing the new parliament. Yulia Tymoshenko's bloc is winning so far, but her major opponent, Viktor Yanukovich's Party of Regions, appears to be a strong competitor. According to preliminary calculations, about 35 percent of electors voted for Tymoshenko. Yanukovich follows with 30 percent of votes, whereas the Communist Party of Ukraine won only five percent. 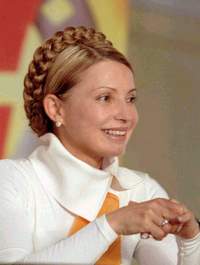 Parliamentary elections in Ukraine save yet another orange intrigue

Although the parties tied to the Orange Revolution looked set to return to power after Sunday's national elections, the man who was the central figure of the 2004 mass protests appears to be increasingly losing his own power.

Although Viktor Yushchenko is now president, elected after the protests turned Ukraine's politics upside down, the adoration of millions that he once claimed is little more than a memory. His party got only about 13 percent of the vote, according to exit polls - even less than its dismal showing in elections last year.

The rising star, it appears, is Yulia Tymoshenko, Ukraine's most vivid political figure and one of its most controversial. She was Yushchenko's most fervent ally in the Orange Revolution, became his prime minister - and then his nemesis. Yushchenko fired her after just seven months in office.

Now she likely holds the key to Ukraine's political future. If she allies with Yushchenko, their parties should have enough parliament seats to form a government; if she holds out, Yanukovych and sundry small allies could hammer together a coalition.

For Yushchenko, the alliance appears to be a last resort in maintaining at least some of his grip on power, which has shrunk dramatically. Constitutional changes he agreed to as part of a compromise during the 2004 protests handed many of the presidential powers to parliament, and Yushchenko has seen many of his policies and decrees challenged and blocked by Yanukovych.

His choice for foreign minister was not approved by parliament, his efforts to join NATO were put on hold and even the chief prosecutor he fired initially refused to leave his office.

The early parliamentary election was in itself Yushchenko's effort to stop what he called Yanukovych's attempts to usurp power.

Yushchenko and his Orange allies weren't able to put together a coalition after last year's national elections. That gave Yanukovych room to move in - and the cohabitation resulted in months of a bitter stand-off that paralyzed the government.

This year, Yushchenko's and Tymoshenko's parties have pledged that if they're able to put together enough seats for a governing coalition, the party with the most seats will name the prime minister and they'll divide the Cabinet seats. That could spell trouble for Yushchenko.

Tymoshenko, known for her steel will and hunger for power, is likely to try to get most of the key seats in the Cabinet for her party, pushing Yushchenko's allies into less important positions.

Her party's strong showing makes her a likely strong candidate in the 2009 presidential election.

The earthy premier, who had fiercely resisted calling early elections, has hinted he will not bow out quietly if he fails to form a coalition. He has warned he may reject the election results, and has threatened to stage the kinds of mass protests that swept Kiev during the Orange Revolution of 2004. He has already erected a giant stage in the center of Kiev and a tent camp reminiscent of the Orange Revolution protests.

And with the Central Election Commission split between Yanukovych and Yushchenko loyalists, the body could be locked in stalemate, with the two sides disagreeing on the vote count and refusing to validate the vote.

Many who stood in Independence Square chanting Yushchenko's name in the freezing weather in 2004 feel he has let them down, and some refuse to forgive him.

During those protests over election fraud, Yushchenko and Tymoshenko swore eternal loyalty to each other. But after the Supreme Court threw out election results declaring Yanukovych the winner and ordered a new vote - which Yushchenko won - he could only take seven months of Tymoshenko as his premier.

He fired her amid mutual accusations of corruption and incompetence, saying Tymoshenko often worked "with the aim of solving her problems" rather than the state's.

He has shored up his support base in the Russian-speaking east and south, and - capitalizing on widespread disillusionment in the Orange team - has sought to win over central and western regions traditionally loyal to the Orange forces by ushering in economic growth and raising wages and retirement pensions.