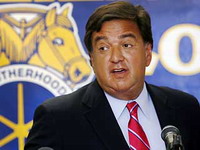 The third-quarter fundraising period ends Sunday. Richardson's was the only presidential campaign from either party to release end-of-quarter estimates. All candidates must file detailed financial reports by Oct. 15.

Richardson's performance could move him closer to Edwards in the race for money and will likely put him well ahead of the remainder of the Democratic presidential pack. Obama and Clinton lead the Democratic and Republican fields in fundraising.

"We continue to count contributions as they come in throughout the day, but this figure obviously separates us from the second-tier candidates and makes clear this is a four-person race," Richardson spokesman Tom Reynolds said Sunday.

The third quarter of the year before a presidential election year is typically a more difficult fundraising period for candidates because they have already tapped their most avid supporters and because the summer months make it more difficult to reach donors. The national election is in Nobember 2008.

Richardson's campaign did not say how much money he had on hand entering the last three months of the year. That figure could be important to assess how well positioned he is against his rivals.

As the quarter came to a close last week, Edwards announced that he intends to accept public financing for his campaign, a decision that will guarantee him several million dollars in matching funds but which will limit him to spending about $50 million (35.3 million EUR) in the primaries.

Reynolds on Sunday said Richardson would be "very hesitant" to do as Edwards has done. He said accepting public financing would limit the amount of money a candidate would be able to spend between winning the primaries and accepting the nomination at the party's summer convention. He said that would give Republicans an advantage.

Meanwhile, Obama's campaign announced Sunday that it has surpassed 350,000 donors for the year, a feat at this stage in the campaign. At midyear, the campaign had reported getting contributions from more than 250,000 individual donors, meaning that about 100,000 new donors contributed to him during the past three months. Campaign aides said the number could grow and was not final.

The campaign did not reveal any fundraising totals for this last quarter. By midyear, Obama had raised $58.5 million (41.3 million EUR), making him the top fundraiser in the presidential race.