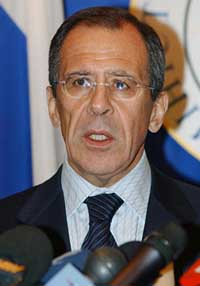 An agreement reached Friday in talks here between six key nations and supported by the European Union gives Iran until November to make progress in answering questions about the program that the United States and others alleged is a cover for nuclear weapons development.

The decision marks another blow for Washington in its diplomatic struggle to toughen existing U.N. sanctions on Iran, whose leader this week declared to the U.N. General Assembly that the nuclear issue was "closed" and vowed to defy attempts to add new penalties.

The Bush administration had hoped to capitalize on growing international frustration with President Mahmoud Ahmadinejad's hardline stance in refusing to halt uranium enrichment and reprocessing that he insists are purely for peaceful civilian energy use.

Despite increasing support for new sanctions in Europe - particularly from Britain, France and Germany - Russia and China refused to yield, insisting on giving Tehran more time to accept an offer for negotiations in exchange for suspending its nuclear activities.

After talks hosted by Secretary of State Condoleezza Rice, the foreign ministers of the five permanent members of the U.N. Security Council and Germany, backed by the E.U.'s top diplomat, agreed to delay a new sanctions resolution.

A joint statement from the U.S., Russia, China, Britain, France and Germany said they would finalize the new resolution and bring it to a vote unless reports in November from the U.N.'s nuclear watchdog and the E.U. foreign policy chief "show a positive outcome of their efforts."

At the same time, Rice said, they would continue work on a new sanctions resolution so if there were no progress, the resolution would be ready to be introduced in the Security Council for a vote.

"We'll be working to finalize the text and we will be watching to see what progress takes place ... in the November timeframe so that we can move to Security Council sanctions should there not be progress," Rice told reporters after the meeting in a New York hotel.

She also noted that the United States and the European members of the so-called "P5+1" group would pursue bilateral financial sanctions against Iran and Iranian government entities. For its part, the United States is considering imposing such measures against elements of Iran's Revolutionary Guard Corps.

However, French Foreign Minister Bernard Kouchner signaled Europe was not ready to move on multilateral sanctions quickly. The French, British and Germans will meet with the full EUon Oct. 15 todiscuss sanctions, butwillwait until the Security Council decides before imposing their own measures, he said.

Kouchner said 14 different types of sanctions were being considered, and he wouldn't rule out Iran's oil industry, the Revolutionary Guards, banks and travel visas as possible targets.

"Nobody refused to follow up, to have a discussion on these 14 items," Kouchner told reporters after the meeting, but he added that some leaders were "completely reluctant" to accept some of them.

Rice denied that the agreement to put off U.N. sanctions was tantamount to a U.S. cave-in to Russia and China although her top negotiator in the matter, the State Department's No. 3 diplomat Nicholas Burns, allowed that "the alchemy of this group is such that anything is going to be a compromise."

Burns, who will meet at least twice with his counterparts in the P5+1 before November to produce a new draft sanctions resolution, maintained that the statement sent "a very tough and strict message to Iran."

He said the U.S. saw the statement as a commitment by all signatories to back a third sanctions resolution if there is no positive Iranian response. But U.N. diplomats cautioned that what constitutes a positive response may differ, especially between the U.S. and Russia.

Russian Foreign Minister Sergey Lavrov, who exchanged sharp words with Rice on the sanctions matter earlier this week, appeared to confirm that thinking by saying Friday's agreement did not automatically mean new sanctions in November.

"The statement is very unambiguous," Lavrov told reporters. "What we discussed today is to concentrate on doing everything to help negotiations to succeed."

In the statement, the ministers and E.U. foreign policy chief Javier Solana welcomed a July agreement between Iran and the International Atomic Energy Agency to answer questions about 20 years of nuclear activity - most of it secret until just over four years ago.

IAEA chief Mohamed ElBaradei is expected to present a report to the agency's board of directors in late November on the status of his investigation, which the United States has downplayed because it only relates to past, and not current or future, actions.

Two U.N. resolutions imposing sanctions on Iran have failed to persuade it to suspend uranium enrichment and in a Tuesday address to the U.N. General Assembly, Ahmadinejad said the nuclear issue is "closed" and vowed to defy any U.N. Security Council move for more sanctions.

No date was set for submitting the new sanctions resolution to a vote in the Security Council because the six nations want to give Solana and ElBaradei flexibility in producing their reports, Burns said.