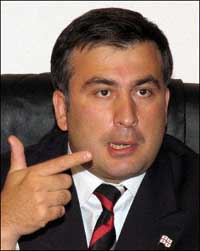 Tensions surrounding the arrest of a former ally of Mikhail Saakashvili who accused president of a murder plot made Georgia’s leader return home Saturday.

Saakashvili returned overnight, deputy administration chief Eka Dzhodzhua said. He had been in New York attending a session of the U.N. General Assembly, and his foreign minister had said Thursday that he would travel directly from there to Greece for a visit scheduled to begin Monday.

Dzhodzhua declined to comment on the reason for Saakashvili's return, which came hours after thousands of opposition supporters rallied in the capital, calling for his resignation in one of the most vocal challenges since the 2003 Rose Revolution street protests that propelled him to power.

The small, U.S.-allied ex-Soviet republic was thrown into turmoil after Irakli Okruashvili, a longtime Saakashvili ally who served as his defense minister until late last year, charged Tuesday that Saakashvili was corrupt and had encouraged him to kill a prominent businessman.

Saakashvili has not commented on the allegations.

They came amid increasing tension between the Georgian government and the breakaway regions of South Ossetia and Abkhazia spiked further. Heavy gunfire between separatist and Georgian forces erupted Thursday night in South Ossetia's main city and Abkhazian officials ordered heavy weaponry and extra troops deployed along the internal border separating Abkhazia and Georgia.

Security agents and police officials detained Okruashvili on Thursday at the offices of the new political party he announced earlier this week. On Friday, prosecutors charged him with extortion, money laundering and abuse of power, and a court early Saturday ordered him held in jail for two months during further investigation.

The ruling came after midnight, delayed by a dispute between Okruashvili's lawyer Eka Beselia and court security guards. Beselia said she was not allowed in, calling it pressure on the defense; a court official said she had left after refusing to produce an item that set off a metal detector. A court-appointed lawyer was provided.

Okruashvili's allegations fed into criticism by Saakashvili's opponents, who accuse him of authoritarian rule.

On Friday afternoon, some 10,000 opposition supporters gathered in front of parliament in downtown Tbilisi, blocking traffic on the capital's main avenue and chanting "Irakli! Irakli!"

In an appeal that was read out by a member of his newly created Movement for a United Georgia, Okruashvili called on his supporters to "unite and fight." Another opposition leader told the crowd it was "time we overthrew this gang led by Saakashvili."

Police with truncheons and several water cannon stood by; skirmishes occasionally broke out with protesters and police pushing one another. A senior official of the ruling United National Movement party said authorities would take steps to stop "any attempts to forcibly overthrow the legitimate government."

The demonstrators dispersed in the evening. Organizers vowed to gather support nationwide and renew protests in even larger numbers, but no date was announced.

Okruashvili served under Saakashvili as prosecutor general and was defense minister until November, when he was named minister of economic development. He left a week later and went into private business.

Saakashvili has vowed to bring Russian-supported South Ossetia and Abkhazia back under government control. He has also sought to decrease the influence of neighboring Russia, which dominated Georgia for most of the past two centuries, pushing his nation to seek membership in NATO and the European Union - a policy that put him on a collision course with Moscow.