Two foreign aid workers who helped free South Korean hostages last month were taken captive in Afghanistan when on the verge of securing the release of a German captive, officials said Thursday. 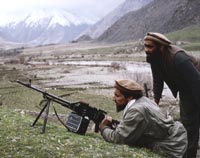 Militants had initially released the German, Rudolf Blechschmidt, but then re-captured him along with the two foreigners working with the International Committee for the Red Cross (ICRC) and their two Afghan drivers, an Afghan official said.

The official had received reliable information about the incident but was not authorized to talk about it. The ICRC itself said it could not confirm the circumstances of the capture of its staff in Wardak province, 60 kilometers (40 miles) west of Kabul.

"They weren't actually involved in the negotiations, but there was supposed to be an imminent release of a German hostage and five Afghans accompanying him," ICRC spokeswoman Claudia McGoldrick said from the organization's Geneva headquarters.

The two ICRC foreigners, both believed to be male, and two Afghan staffers failed to return to Kabul Wednesday evening after the mission to pick up the hostages.

"From what we understand, that operation was never completed for reasons that we can't confirm at the moment," she said. "We can't confirm if whatever has happened to them is connected to that episode."

She said the aid agency is in "direct contact with all parties to the conflict to determine exactly what has happened."

"We are trying to get them released," Mangal said.

Blechschmidt, a German engineer, was abducted on July 18, one day before the South Koreans were captured. It is believed that he was initially taken by criminals in Wardak, then later handed over to the Taliban.

Blechschmidt is one of two German engineers and five Afghans who were snatched together. The other German was found dead of gunshot wounds on July 21, while one of the Afghans managed to escape.

It was not immediately clear how many Afghans were being held with Blechschmidt, though McGoldrick said there were five with him.

The unnamed official said the two foreigners had helped coordinate the release of 19 South Korean captives late last month. The official spoke on condition of anonymity because of the sensitivity of the situation.

The number of kidnappings has spiked this year after the Taliban secured the release of five insurgent prisoners in exchange for a captive Italian journalist in March - a heavily criticized swap that many feared would encourage abductions.

The South Korean hostage crisis was another windfall for the Taliban, winning them face-to-face talks with South Korean government delegates.

Militants kidnapped 23 South Koreans on July 19 in Ghazni province as they traveled by bus on a dangerous road from Kabul to volatile Kandahar in the south. Two hostages were killed; the rest were released after weeks of negotiations between the Taliban and the Korean delegation.