Iran’s president, insulted by the World leaders, is turning to South American leftists who expressed willingness for energy and trade partnership with his country. 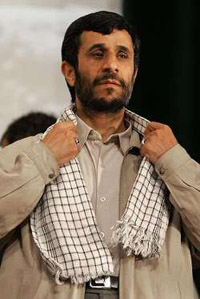 Mahmoud Ahmadinejad was headed to Bolivia Thursday to establish first-time diplomatic relations with the Andean nation.

He and President Evo Morales were expected to sign accords that Bolivian officials say could help them better tap the continent's second-largest natural gas reserves after Venezuela's and drum up urgently needed agricultural and infrastructure investment.

After receiving military honors at La Paz' airport during a departure ceremony, Ahmadinejad is then Caracas-bound to meet Venezuelan leader Hugo Chavez.

On the heels of a U.N. General Assembly appearance in which he exacerbated concerns about Iranian bellicosity, Ahmadinejad's trip south underscores his strengthening links to Latin American nations also including Nicaragua and Ecuador even as the United States tries to isolate him internationally.

"It's a connection that is growing stronger all the time," said Alberto Garrido, a Venezuelan writer and political analyst. "It's Iran's answer to the United States on its own home turf. The United States is in the Middle East, so Iran is in Latin America."

Energy experts doubt the new Bolivia-Iran alliance will let Morales deliver on his promise of using gas profits to ease grinding poverty in South America's poorest nation. But by opening diplomatic ties, Iran and Morales' "anti-imperialist" administration appear to be on the same political and economic page and Bush administration policies they oppose.

The growing closeness between Iran and Chavez-allied governments is viewed with alarm by the opposition in Venezuela and Bolivia, and by Washington, which calls Iran a sponsor of terrorism.

The move reminds U.S. Rep. Connie Mack, a Florida Republican, "of the relationship that Fidel Castro had with Russia."

"Ahmadinejad recognizes that if he can get a foothold in Latin America, he can continue to spread his hatred for the United States," Mack said, adding that it is now imperative for Washington to reach out more to a region analysts say it largely ignored post 9-11.

"You don't want to have your enemy at your backdoor."

Bolivia is forging "diplomatic relations with Iran to improve the country's economic situation, not to hurt or offend anyone," Garcia said while Morales was in New York this week at the U.N.

Bolivian and Iranian officials declined to offer details on what sort of energy agreements are in the works, but analysts say Iran alone can't give Bolivia the massive investment it needs to boost gas output in the face of potential domestic shortages and looming commitments to its big clients, Argentina and Brazil.

"I think the fact that Morales is talking to the Iranians is a sign of desperation," said Christopher Garman, who heads Latin American research at the Eurasia Group political risk consultancy. "Bolivia is not going to have a white horse saving its energy needs."

But Bolivia-Iran trade can't go anywhere but up.

Bolivia exported nothing to Iran between 2000 and 2006, and Iranian exports to Bolivia totaled just US$10 million (EUR7 million) last year, according to government statistics, down from US$24 million (Ђ17 million) a year earlier.

Meanwhile, ties between Caracas and Tehran are strong and growing. Iran and Venezuela have signed more than 180 trade agreements since 2001, worth more than US$20 billion (EUR14 billion) in potential investment between the two, according to Iran's official news agency, IRNA.

- Iran has partnered with Venezuela to begin producing cars, tractors and plastic goods and has agreed to help Venezuela build public housing.

- Iran Air began flights between Tehran and Caracas, with a stopover in Syria, earlier this year.

- Venezuela and Iran have started building two petrochemical complexes - one in each country - at a total cost of US$1.4 billion (EUR990 million).

- Iran is also helping explore for natural gas off the Venezuelan coast, and the two governments expect to jointly invest US$6 billion (EUR4.2 million) in heavy crude projects, all in the next two years, Venezuela's oil minister, Rafael Ramirez, told the AP.

- Venezuelan and Iran have formed a joint company for international energy projects and are looking to build a refinery in Syria, Ramirez said.

Chavez is a vocal defender of Iran's nuclear program, accusing the United States of trumping up unfounded concerns about possible nuclear weapons as a pretext to attack a regime it opposes.

"Iran isn't making an atomic bomb, not at all," Chavez said Monday. "They just want to develop nuclear energy. Venezuela will do it also someday."