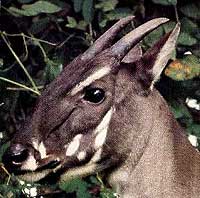 An environmental group said Thursday that Vietnam had set aside a sanctuary for a rare creature known as the saola, one of the few new large animal species to be discovered anywhere in the world over the last century.

Authorities in the central provinces of Thua Thien Hue and Quang Nam set aside two new reserves along the Vietnam-Laos border to protect the saola, which belongs to the same family as cows, goats and antelopes, the World Wide Fund for Nature said.

"I describe it as a forest antelope," said Barney Long of the WWF's Vietnam program. "It's so new, we don't actually know exactly what it is."

The saola was first identified in 1996, the first time a new large mammal species had been discovered in over half a century, according to the WWF.

The saola population is estimated at just 250. It lives in the Annamites Mountains, which are home to a wide variety of endangered species, including the white-cheeked crested gibbon, one of the world's most endangered primates.

The saola population is under threat from hunters, who sell their meat to expensive restaurants in Hanoi and Ho Chi Minh City, WWF said.