Myanmar forces shoot at protesters at least one killed

Myanmar security forces raided two Buddhist monasteries Thursday, beating up and hauling away more than 70 monks after a day of violent confrontation with monk-led protesters that drew international appeals for restraint. 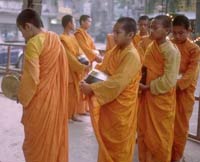 Myanmar forces shoot at protesters at least one killed

The security forces in the isolated Southeast Asian nation fired at protesters for the first time Wednesday in street protests that have brewed over the past month into the biggest rallies against Myanmar's military rulers since 1988. At least one man was killed and others wounded in chaotic clashes in Yangon.

The protesters, led by thousands of monks in cinnamon robes, have been demanding more democratic freedoms, the release of political activists and economic reforms in the impoverished nation.

An Asian diplomat who spoke on condition of anonymity told The Associated Press on Thursday that Nobel Peace Prize laureate Suu Kyi remained at her Yangon residence where she has been detained for 12 years.

Rumors had circulated that she had been taken away to Yangon's notorious Insein prison.

The diplomat said that junta had deployed more security forces around Suu Kyi's house and on the road leading to her residential compound and that more than 100 soldiers were now inside the compound.

"The sign of increasing security forces make me confident that she is still there," the diplomat said. He said others told him that they had seen the diminutive opposition leader in her home Wednesday night.

The diplomat also said flyers were spreading around the nation's largest city of Yangon on Thursday, encouraging more civilians to join the protests.

Several monasteries that are considered hotbeds of the pro-democracy movement were raided by security forces before dawn in an apparent attempt to prevent the demonstrations spearheaded by the Buddhist clergy.