U.S. senator - Larry Craig - who is under pressure to quit after his arrest in a sex sting in an airport bathroom has decided he wants to keep his job, but his tenure may still be a short one. 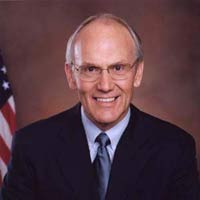 Sen. Larry Craig's lawyers asked a Minnesota judge Wednesday to let the three-term senator withdraw his guilty plea in a sex sting at a Minneapolis airport restroom. Afterward, Craig issued a statement saying he will stay in office "for now."

People close to Craig said that means until the judge rules.

Hennepin County Judge Charles Porter said that will be at the end of next week at the earliest.

Craig said earlier he planned to resign Sept. 30, then left the door open to stay if he could successfully withdraw his plea.

Craig, who originally had planned to seek a fourth term next year, pleaded guilty in August to disorderly conduct following a June 11 sting operation in a men's room at the Minneapolis airport.

That he will stay in the Senate past Sunday was an unwelcome development for Senate Republican leaders who have made clear they wish Craig would step down and let the Republican governor of Craig's state name a replacement.

Idaho Gov. C.L. "Butch" Otter canceled an extended tour of the state's overcrowded prisons this week to interview some of the nearly 30 people - including Lt. Gov. Jim Risch and Attorney General Lawrence Wasden - who have publicly expressed interest in Craig's job.

Senate Minority Leader Mitch McConnell, a Republican, told reporters he had nothing to add to previous statements in which he said he thought Craig made the proper decision on Sept. 1, when he announced his intention to resign by month's end.

But Sen. Mike Crapo, a Republican who is Craig's strongest ally in the Senate, said that Craig, "like every citizen facing allegations, deserves to be able to fully defend himself."

Craig's lawyer, Billy Martin, said it is "near impossible, and it should be" for Craig to withdraw his plea. But he said his client's conduct - shoe tapping and hand gestures under a men's room stall divider - was not criminal.

The arresting officer described those gestures as signals recognized in the gay community as an invitation for sex. Craig has repeatedly said he is not homosexual.

Jim Weatherby, professor emeritus of political science at Boise State University, said Craig has been permanently weakened by the charges.

"How effective can he be, when his leadership wants him out?" Weatherby asked. "I suspect they would want to punish him further than the steps they've already taken."

Craig gave up his leadership posts on Senate committees after his arrest become public. Senate Republicans would have to vote to restore those posts, an action seen as highly unlikely.