A tropical depression put parts of Mexico's Gulf Coast under a storm watch Thursday, while Tropical Storm Karen strengthened to near hurricane status in the open Atlantic Ocean. 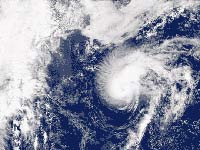 The 13th depression of the season could strengthen into a named storm over the next day in the southwestern Gulf of Mexico, according to forecasters at the National Hurricane Center in Miami.

The depression was nearly stationary and was expected head west or west-southwest over the next 24 hours. Top sustained winds were near 35 mph (56 kph).

Meanwhile, Karen was centered about 1,170 miles (1,885 kilometers) east of the Windward Islands, with top sustained winds near 70 mph (113 kph), forecasters said. It was just 4 mph (6 kph) shy of being upgraded to a hurricane, but posed no immediate threat to land.

It was moving toward the west-northwest near 13 mph (21 kph). Tropical storm force winds extend outward up to 205 miles (330 kilometers) from the center.