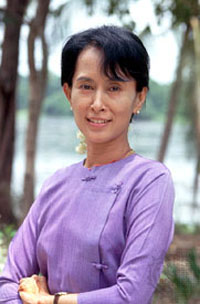 European Union officials also appealed to Myanmar's military junta on Tuesday not to crack down on the thousands of demonstrators whose anti-government protests have become the largest since a 1988 pro-democracy uprising was brutally suppressed by the military.

The marches, led by Buddhist monks for the past eight days, have grown steadily and were joined on Tuesday by members of the pro-democracy National League for Democracy, headed by elected Myanmar leader Aung San Suu Kyi, who is kept under house arrest in Yangon by the military junta. She appeared outside her house last week as a gesture of support the marchers.

Soon after the end of Tuesday's demonstration, held in defiance of government orders, truckloads of soldiers were seen heading downtown. Two army divisions were either already in or moving toward Yangon from outlying areas, including one that took part in the suppression of the 1988 uprising, according to diplomats and ethnic guerrillas.

Miliband, addressing the governing Labour Party's annual conference, said, "I for one thought it was brilliant to see Aung San Suu Kyi alive and well outside her house last week. I think it will be a hundred times better when she takes her rightful place as the elected leader of a free and democratic Burma."

EU spokesman Amadeu Altafaj Tardio said the 27-nation bloc was "very concerned" about the situation in Myanmar adding EU officials were watching the situation closely, but said the EU was at this time not considering an expansion of sanctions against the junta.

U.S. President George W. Bush was expected to announce additional sanctions later Tuesday meant to further isolate key members of the junta and those who provide them financial aid.

"So far no violence has been used to quell peaceful demonstrations, however we are also concerned by the increasing military presence on the streets," Altafaj Tardio told reporters. "We are urging all stakeholders, particularly the government of Burma/Myanmar to exercise maximum restraint."