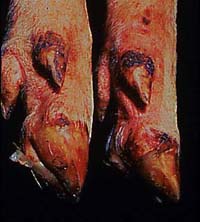 Two temporary control zones established in Hampshire, about 55 miles (90 kilometers) southwest of London, to prevent the spread of the foot-and-mouth virus have since been lifted, the Department for Environment, Food and Rural Affairs said in a statement posted to its Web site.

The announcement that the tests have come back negative will come as a relief to farmers, who are already suffering from movement restrictions at one of the busiest times of the year for livestock sales. )