Five trade unionists were detained after thousands of workers staged a protest at one of Egypt's biggest textile factories demanding higher payment and better work conditions. 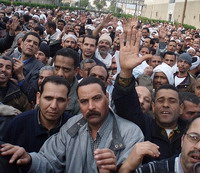 About 20,000 workers at the Misr Spinning and Weaving Company in the Nile Delta town of el-Mahalla el-Kubra began a strike on Sunday demanding higher wages, more work benefits and a larger share of the company's profits.

A public prosecutor ordered the detention of the five unionists for four days of questioning on charges of inciting the strike, the officials said.

They were also accused of "unlawful gathering" and "destruction of public properties," the officials said on condition of anonymity because they were not authorized to speak to the press.

Government officials said the strike had caused the state-owned company 10 million Egyptian pounds (US$1.8 million(1.28 million EUR)) in losses on the first day of the walk out.

Workers in the factory have been complaining of low wages, with some employees receiving 150 Egyptian pounds (US$27/19.13 EUR) a month.

They also complain of low profit bonuses while the company reported a profit of 217 million pounds (US$120 million/85.03 million EUR) the last financial year.

Over the past few months low paid workers across Egypt have staged strikes demanding wage increases following soaring food prices. A government report revealed this week that the price of basic foodstuffs rose by 48 percent inthe past year.