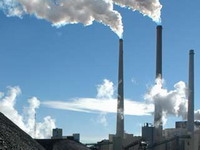 The U.S. administration of President George W. Bush showed no sign, however, that it would reverse its stand against the mandatory emissions cutbacks endorsed by 175 other nations. Some here expressed fears the White House, with its own meetings this week, would launch talks rivaling the U.N. climate treaty negotiations.

Bush did not take part in the day's summit meetings, which drew more than 80 other national leaders, but was to attend a small dinner Monday evening, a gathering of key climate players hosted by U.N. Secretary-General Ban Ki-moon.

Ban set the day's theme in his opening speech, declaring that when it comes to global warming, "the time for doubt has passed," and a breakthrough is now needed in the U.N. climate talks, "the appropriate forum for negotiating global action."

He organized the one-day summit to build momentum for December's annual climate treaty conference in Bali, Indonesia, when the Europeans, Japanese and others hope to initiate talks for an emissions-reduction agreement to succeed the Kyoto Protocol in 2012.

The 175-nation Kyoto pact of 1997, which the U.S. rejects, requires 36 industrial nations to reduce carbon dioxide and other heat-trapping gases - emitted by power plants and other industrial, agricultural and transportation sources - by a relatively small 5 percent below 1990 levels by 2012.

Advocates say a breakthrough is needed at Bali, almost certainly requiring a change in the U.S. position, to ensure an uninterrupted transition from Kyoto to a new, deeper-cutting regime.

Chief U.N. climate scientist Rajendra Pachauri told the summit of the mounting evidence of global warming's impact, including the accelerating rise in sea levels as oceans expand from heat and from runoff of melting land ice.

"The time is up for inaction," he said.

A Pacific islander, President Emanuel Mori of the Federated States of Micronesia, attested to that impact, telling the summit that encroaching seas are already destroying crops, contaminating wells and eating away at his islands' beaches.

"How does one explain to the inhabitants that their plight is caused by human activities done in faraway lands?" he asked.

The United States has long been the world's biggest greenhouse-gas emitter,

Bush objects that Kyoto-style mandates would damage the U.S. economy and should have been imposed on fast-growing poorer countries, such as China and India, as well as on developed nations. The U.S. president instead has urged industry to cut emissions voluntarily and has emphasized research on clean-energy technology as one answer.

On Thursday and Friday, Bush will host his own Washington climate meeting, limited to 16 "major emitter" countries, including China and India, first in a series of U.S.-led gatherings expected to focus on such themes.

"The Washington meeting is a distraction," Hans Verolme, climate campaigner for the Worldwide Fund for Nature, complained to reporters. The U.S. leadership "need to show they are serious and implement domestic legislation to reduce emmissions," he said.

U.S. Secretary of State Condoleezza Rice, speaking at the summit, put the Washington meetings in a different light, describing them as designed "to support and help advance the ongoing U.N. discussion."

Japan's envoy, former Prime Minister Yoshiro Mori, said Tokyo believes the separate U.S. talks will "contribute to achieving consensus" in the U.N. process, in which all agree China, India and others must eventually accept emissions limits.

But Japan and others, to one degree or another, stressed that all nations - including the United States - must accept emissions targets.

To try to spur global negotiations, the European Union has committed to reduce emissions by at least an additional 20 percent by 2020.

Speaking for the EU, French President Nicolas Sarkozy told Monday's summit that "all the developed countries and the largest emitters" must commit to a 50-percent reduction by 2050. He also said the U.N. negotiating process is the only "efficient and legitimate framework."

California's Schwarzenegger told delegates that U.S. states are embracing emissions caps, even if the Republican U.S. administration is not.

The Republican governor and Democrat-led legislature have approved a California law requiring the state's industries to reduce greenhouse gases by an estimated 25 percent by 2020.

"California is moving the United States beyond debate and doubt to action," Schwarzenegger said. "What we are doing is changing the dynamic."

In a summit luncheon speech, former U.S. Vice President Al Gore, a leading climate campaigner, painted a dire picture of changes already under way because of global warming, including last week's scientific report that the Arctic ice cap this summer shrank to a record-small size.

"We cannot continue a slow pace," Gore said, proposing that heads of state convene in summits every three months beginning in 2008 to ensure the world is doing all it can to meet the threat.