Nicolas Sarkozy to discuss with Venezuela's president question of hostages

French President Nicolas Sarkozy will meet with Venezuela's president to discuss securing the release of hostages held by rebels in Colombia. 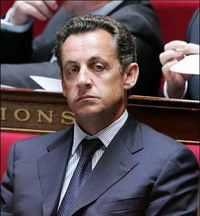 Nicolas Sarkozy to discuss with Venezuela's president question of hostages

Sarkozy told reporters at the United Nations that any help would be welcome in securing the release of Ingrid Betancourt, a French-Colombian citizen and former candidate for Colombia's presidency.

"Everyone who can help bring an end to this drama is welcome," said Sarkozy, who will meet Tuesday with Colombian President Alvaro Uribe on the sidelines of the U.N. General Assembly. "That's the reason I have had several telephone conversations with President Hugo Chavez, that I invited him to France, and his intervention will be welcome."

Sarkozy, speaking in French, said it is France's "obsession" that Betancourt be returned to her family as soon as possible. Upon his arrival in New York on Sunday, he met with her daughter, Melanie Betancourt.

Chavez, who is seeking to broker a prisoner swap, has asked Uribe for permission to travel into territory dominated by the Revolutionary Armed Forces of Colombia, or FARC. But Colombia's U.S.-allied government has dismissed such a meeting as inappropriate.

On his weekly Sunday radio broadcast, Chavez reiterated that he hopes to meet soon with FARC leader Manuel Marulanda as he seeks to negotiate the prisoner exchange between the rebels and the Colombian government.

Sarkozy was typically playful as he fielded questions from the press Monday, using a stern schoolteacher's voice to quiet down reporters who did not respond to his first few attempts. Later, after an interpreter begin translating a question asked in English, he quickly scolded, "I understood. I understood."

The French president reiterated his support for Israel - a point which has distinguished him from his predecessor Jacques Chirac, whom many claimed was overly pro-Arab. And he added his support for Palestinian Mahmoud Abbas, who is increasingly under siege since militant Hamas wrested control of Gaza from his moderate Fatah party in June.

"France tells our Israeli friends, as we do to Mr. Mahmoud Abbas, that we support you. It's now that we must make an effort to reach an accord," Sarkozy said, adding that Abbas was a credible, respectable leader. "I don't think time is on our side."

President George W. Bush has called for a Middle East peace conference in the United States before the end of the year.

Sarkozy, who will chair a Security Council summit on peace and security in Africa Tuesday, met with Angolan President Jose Eduardo Dos Santos and announced he would travel to the impoverished country at the beginning of next year.

"I think I can say that the page is definitively turned on bad relations between Angola and France," Sarkozy said after the meeting Monday.

In March, French prosecutors asked that 42 people, including the son of former President Francois Mitterrand, stand trial for selling arms to Angola during its 27-year civil war, which ended in 2002.

Sarkozy avoided a question on Iran, saying he had already said enough on the subject, though he did reiterate that the Iranian regime was in violation of international nonproliferation treaties.

France, along with the United States and Britain, is pushing for additional sanctions against the Iran - which the international community suspects of developing nuclear weapons, though Iran denies the charge.

Earlier in the day Sarkozy delivered a speech to a conference on climate change, underlining the urgency of creating universally accepted limits on carbon emissions.

In a comment directed at the U.S., one of the biggest emitters, he said, "all the developed countries and the largest emitters" must commit to a 50 percent reduction by 2050. Sarkozy, speaking for the EU, also said the U.N. negotiating process is the only "efficient and legitimate framework" - a rebuke of a separate climate meeting Bush has called for later in the week.