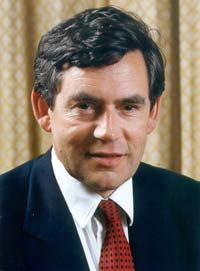 Brown's predecessor Tony Blair took the unprecedented step of seeking a parliamentary vote before Britain's involvement in the 2003 U.S.-led war in Iraq. Brown said parliament should have a say on all future engagements.

Brown said in his first speech to a Labour party conference as leader that the fight against international terrorism will need more than military might. "To prevail in this struggle will require more than military force and we will work with our allies to isolate extremists and win the battle of hearts and minds," Brown told delegates.