Germany sought Monday to smooth tensions with Beijing over Chancellor Angela Merkel's weekend meeting at her office with the Dalai Lama, stressing that the encounter did not mean Berlin was questioning China's "territorial integrity." 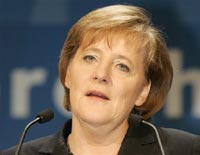 Merkel met the exiled Tibetan spiritual leader - whom China views as a beacon for pro-independence sentiment in the region - on Sunday. She went ahead with the meeting at her Berlin office despite Chinese expressions of displeasure.

In a further apparent sign of irritation, China informed Germany that a traditional breakfast meeting between the countries' foreign ministers at this week's U.N. General Assembly meeting could not take place for "scheduling reasons," the German Foreign Ministry said Monday.

Heusgen "again made clear that we have a great interest in continuing, further developing and intensifying good relations with China," Steg said.

He also made clear that "there is no change in Germany's policy toward China; the territorial integrity of China is beyond question for us."

China routinely criticizes visits abroad by the Dalai Lama, who fled Tibet for India in 1959 during a failed uprising against Chinese rule.

The winner of the 1989 Nobel Peace Prize remains popular among Tibetans and widely respected abroad, despite efforts to undermine him by Chinese authorities.

German officials say the Dalai Lama made clear at Sunday's meeting - which they characterized as a private encounter with a religious leader - that he does not seek Tibet's independence from China.

They say Merkel offered her support for his nonviolent efforts to maintain the region's cultural identity and strive toward religious and cultural autonomy.

German firms are eager to do business in China, and Steg said he was confident economic relations would continue to grow.

However, Merkel - who grew up in communist East Germany - has balanced that with raising human rights publicly when visiting China, most recently a month ago.

China then canceled a meeting planned Sunday to discuss legal issues with German Justice Minister Brigitte Zypries and other officials. It cited "technical reasons" and did not mention the Dalai Lama, according to the German government.

"We hope these technical reasons can be overcome" and a new date set, Steg said.

Foreign Ministry spokesman Martin Jaeger said Germany also was trying to find another date for the countries' foreign ministers to meet, and refused to speculate on whether Chinese anger over the Dalai Lama's visit might have been behind the "scheduling" problems Beijing cited.

Chinese Embassy officials in Berlin could not immediately be reached for comment Monday.