As China's communist leaders wrap up a massive pension fund scandal ahead of a key party congress, six officials have been sentenced and other will be tried soon. 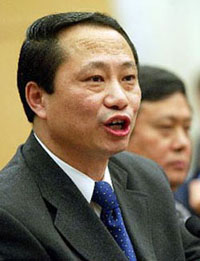 The No. 1 Intermediate People's Court in the northeastern city of Changchun sentenced Zhu Junyi, former head of the city's Labor and Social Security Bureau, to 18 years in prison for bribery, embezzlement and abuse of power, Caijing, a financial magazine, reported on its Web site.

There was no word on a date or location for the trial of former Shanghai party secretary Chen Liangyu, the highest level party official to be dismissed in a decade. Chen is reportedly in jail awaiting trial on corruption charges as are a number of other former officials and business executives.

The trials of several other key figures implicated in the scandal, including tycoon Zhang Rongkun, whose Fuxi Investment company was alleged to have used pension funds for toll roads and other projects, were to begin soon in Changchun, the Ta Kung Pao report said.

Others whose trials will soon start include Sun Luyi, a former deputy chief of the Shanghai Communist Party municipal committee, and Qin Yu, former head of Shanghai's Baoshan district and a former secretary to Chen, it said.

Zhu, the highest level official sentenced so far, was accused of abusing his position to make risky investments, turning the city pension fund into an illicit bank that lent more than 7 billion yuan (US$933 million; EUR664 million) to property developers and other companies, Caijing reported.