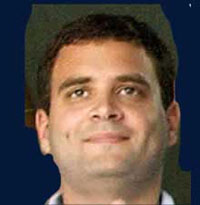 The governing Congress party chief Sonia Gandhi has elevated her son to a key party position Monday for the first time since he joined politics three years ago.

Rahul Gandhi, 37, will be a party general secretary and also look after its youth wing, Janardhan Dwivedi, a party spokesman, told reporters. He will also be a member of the party's highest policy-making body - the Congress party Working Committee.

The appointment comes amid speculation that India's parliamentary elections may be held earlier than scheduled in 2009 because of a major rift between the Congress and its communist allies over the India-United States nuclear deal.

Prime Minister Manmohan Singh's government depends on the communists for its survival.

Rahul belongs to the Nehru-Gandhi dynasty - unrelated to India's independence leader Mohandas K. Gandhi - which has governed India for nearly four decades of its 60 years as an independent nation.

Monday's elevation comes months after Sonia Gandhi had asked him to lead the party's campaign in northern Uttar Pradesh state. The move didn't pay off as the Congress party gained no additional seats in the state assembly despite his campaigning. The party retained 13 seats in a 403-seat state legislature.

That election was the first serious political test for Gandhi, who is seen as a rising star in the Congress party and already is mentioned as a possible future prime minister.

The nuclear deal with the United States, which faces stiff opposition in India, is expected to bring a new source of energy to a fast-growing country working to lift millions out of poverty.

The deal allows the United States to send nuclear fuel and technology to India, which has been cut off from international atomic markets for three decades because of its refusal to sign nonproliferation accords and its testing of nuclear weapons.

Opponents in the United States say the extra fuel the measure provides could boost India's nuclear bomb stockpile by freeing up its domestic uranium for use in weapons.

That, they say, could spark a nuclear arms race in Asia, where neighboring Pakistan and China already are nuclear-armed.