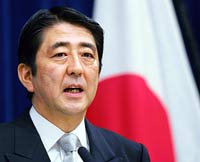 Japanese Prime Minister Shinzo Abe said Monday that ailing health prompted him to suddenly announce his resignation, and he apologized to the nation.

Abe, 53, announced on Sept. 12 he wanted to quit without mentioning health problems, and promptly checked into a hospital the following day for stress-related intestinal ailments.

Abe, speaking at a news conference at the Tokyo hospital, said that he didn't think it was appropriate to discuss his health in his original announcement.

The resignation threw the Japanese political world into confusion. The ruling party on Sunday chose moderate Yasuo Fukuda to succeed him, and Fukuda was expected to be elected prime minister in parliament on Tuesday.