Cuba published a photo Sunday of a standing, smiling Fidel Castro meeting with Angola's president, the first head of state to see the ailing 81-year-old since June. 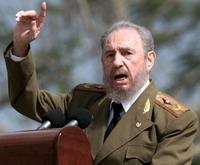 The picture, which appeared on the front page of Communist Party youth newspaper Juventud Rebelde, shows Castro in a white, red and blue track suit, black athletic pants and tennis shoes. The Cuban leader appears to have gained weight and wears a warm half-smile as he shakes hands with Angolan President Jose Eduardo Dos Santos, who was in Cuba since Thursday on an official visit.

News of the meeting also led the island's national newscast, which aired the photo but no additional footage. It came two days after Castro gave a surprise hourlong interview on state television during which he answered rumors about his death that have swirled recently in the United States by saying simply, "well, here I am."

The picture was the first time Castro has been seen standing in months. During the interview, which officials said was taped just hours before it aired Friday evening, he stayed seated while speaking slowly, often trailing off mid-sentence and looking thin and pale but upbeat.

Held in an undisclosed location, the meeting between Castro and Dos Santos reportedly took place Saturday afternoon and lasted an hour and 45 minutes.

Only wicker furniture, a large window and a house plant can be seen in the photo, making it difficult to determine where it was taken. But similar background has shown up in past images of Castro, suggesting that he has been recuperating in the same place for a lengthy period.

Castro has not been seen in public since July 31, 2006, when he announced that emergency intestinal surgery was forcing him to cede power to a provisional government headed by his 76-year-old brother Raul.

The younger Castro addressed reporters Sunday on a tarmac in the province of Matanzas after seeing Dos Santos board a flight off the island. "There is a magnificent photo on the front page" of Juventud Rebelde, he said.

The acting president also referenced a recent, well-received speech in which he sparked debate about Cuba's future by suggesting the island could seek more foreign investment and by calling for unspecified "structural changes" in the farming sector.

"Now they are discussing the speech from the 26th of July. I have told everyone that they can speak, not only about the speech but about anything they want to say," Raul Castro said Sunday, "with bravery, with sincerity, without many illusions that we are magicians and are going to resolve problems. But we need to fill ourselves with the opinions of everyone."

Castro, his elder brother's designated successor for decades, is said to be enamored with free-market reforms that were implemented under a single-party system and helped revitalize the economy of communist China.

Fidel Castro has fiercely opposed economic reform, however, and during his nearly 14 months in power, Raul's government has taken only small steps such as raising payments to milk and meat producers, paying off debts to farmers and halting importation blocks on certain goods.

Fidel Castro's condition and exact illness are state secrets, and before Friday it had been more than three months since Cuba's government released images showing his recovery - prompting rumors in Miami and elsewhere that he had died.

Dos Santos is the first head of state to visit with the elder Castro since June 12, when the ailing leader's close ally, Venezuelan President Hugo Chavez, made a surprise visit to Havana. The pair talked behind closed doors for six hours, though no images of that meeting were released.

Cuba and Angola have had close relations for more than three decades, with Cuba sending as many as 350,000 military and technical personnel to Africa between 1975 and 1988 to help the Angolan government and the Namibian Liberation Movement defeat U.S.-supported rebels and South African troops.