Ex-NASA astronaut Lisa Nowak returned to court Wednesday to ask a judge to throw out evidence in her assault and attempted kidnapping case over an alleged attack on a romantic rival. 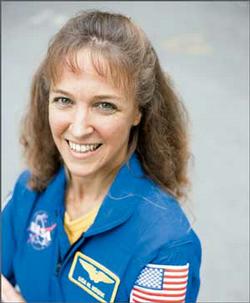 Nowak's attorney, Donald Lykkebak, wants Circuit Court Judge Marc L. Lubet to bar use of her lengthy arrest interview and not allow prosecutors to use evidence found in her car. He argued she did not consent to the search and was not advised of her rights before the interview.

Nowak's trial is scheduled to begin April 7 and Lykkebak is expected to use a temporary insanity defense, saying Nowak suffered from major depression, obsessive-compulsive disorder, insomnia and "brief psychotic disorder with marked stressors."

Nowak, 44, was arrested in February after allegedly confronting Colleen Shipman, the girlfriend of a former space shuttle pilot Nowak had been seeing. Nowak allegedly stalked Shipman at the Orlando airport, then attacked her with pepper spray. Shipman was able to drive away.

Police said that when Nowak was arrested she had a duffel bag that contained a steel mallet, a 4-inch (10-centimeter) knife and a pellet gun.

Nowak told police she just wanted to talk to Shipman to find out "where she stands" in the love triangle. She was dismissed from the astronaut corps a month after her arrest.

The married mother of three has pleaded not guilty to attempted kidnapping, battery and burglary with assault.