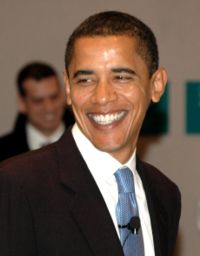 More openness and transparency must be in the marketplace to bolster the trust of investors and the public, Barack Obama said on Monday.

The reasoning "what's good for me is good enough" has crept into parts of the business world, Obama said at the NASDAQ Marketsite. "It's a mentality that sees conflicts of interest as opportunities for profit."

The Illinois senator said that kind of mentality not only offends the country's morals but also endangers the markets.

"Markets can't thrive without the trust of investors and the public," he said.

Obama said everyone suffers "when we do not ensure that markets are transparent, open and honest."

He used the subprime mortgage crisis as an example, saying it started as a good idea until some lenders and brokers began lowering their standards as they saw how much money could be made. It was tempting to look the other way, he said.

"The consequences are now clear: nearly 2.5 million homeowners could lose their homes" and millions of others could see their homes devalued, Obama said.

Obama said there were lessons to be learned from this: honesty and accountability cannot be overlooked.