Final Emmy award as best dramatic TV series claimed to "The Sopranos." Winners in other top categories were scattered across the prime-time landscape. 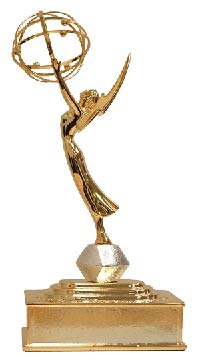 A stunned James Spader said he felt like he just "stole a pile of money from the mob" in winning best drama series actor as a devilish lawyer on "Boston Legal" at Sunday night's ceremony. And Sally Field was her flustered self as winner of best actress in a drama for her matriarchal role in "Brothers & Sisters."

Field, fondly remembered for her years-ago TV stints as "Gidget" and "The Flying Nun," bumped off Edie Falco of "The Sopranos."

"Surely this belongs to all the mothers of the world," Field said in a rambling acceptance speech that wound up with a swear word that had to be bleeped by Fox censors.

Field's speech recalled her much-parodied 1985 acceptance of the best-actress Oscar for "Places in the Heart," in which she said the famous line: "I can't deny the fact that you like me. Right now, you really like me."

Fox blacked out the show for a few seconds when Romano used a strong word in a joke about his former "Everybody Loves Raymond" wife, Patricia Heaton, sleeping with her new "Back to You" co-star Kelsey Grammer.

"30 Rock" took top comedy series honors for its behind-the-scenes look at the craziness of a late-night sketch show.

Tina Fey, the show's star and creator, acknowledged the show's low ratings in its freshman year by thanking its "dozens and dozens of viewers."

Ricky Gervais of "Extras" beat out Steve Carell of "The Office" for lead comedy series actor. Gervais originated the buffoonish boss role that Carell fills on the American version of the British sitcom.

The biggest laugh of the night was earned by presenters Jon Stewart and Stephen Colbert, after they announced that Gervais won.

"Ricky Gervais could not be here tonight. Instead we're going to give this to our friend, Steve Carell," Stewart said. Carell bounded on stage, sharing a group hug with Stewart and Colbert.

America Ferrera, TV's breakout star as the dumpy fashion magazine assistant on "Ugly Betty," was the lone acting front-runner to win. She added an Emmy as leading comedic actress to her Golden Globe and Screen Actors Guild victories this year.

"This is such an amazing, wonderful achievement," Ferrera said. "The award is to be able to get up and go to work tomorrow."

Regarded as one of television's best-ever series, "The Sopranos" aired its final show this past June, leaving many viewers grumbling about its enigmatic, cut-to-black ending.

Yet the show got some final respect Sunday night with two standing ovations - first, when the cast was introduced, and again when the series received the night's top honor.

"And, hell, let's face it, if the world and this nation was run by gangsters" - Chase paused and shrugged, as the audience laughed - "maybe it is."

Rookie host Ryan Seacrest of "American Idol" was seen sparingly after opening the three-hour telecast. Instead, he turned the Shrine Auditorium's in-the-round stage over to the veteran comedy chops of Romano, Ellen DeGeneres and Lewis Black.

One of the night's other standing ovations went to former vice president Al Gore, whose Current TV channel, which features viewer-created videos, was honored for achievement in interactive television.

"We are trying to open up the television medium so that viewers can help to make television, and join the conversation of democracy, and reclaim American democracy by talking about the choices we have to make," said Gore, whose global-warming documentary "An Inconvenient Truth" received an Oscar earlier this year.

Queen Latifah helped salute the groundbreaking miniseries "Roots" on its 30th anniversary. The saga about a black American family's history "brought great honor to the art form that we celebrate," she said.

"Let us all work to ensure that we all honor the legacy of `Roots' not just tonight but in everything we do," added "Roots" star John Amos, reunited onstage with his castmates to yet another standing ovation.