A Cabinet minister defended Australia's rejection of a U.N. declaration on indigenous people's rights, saying Monday that it would have split the country by giving Aborigines special privileges. 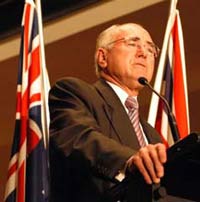 The United Nations General Assembly adopted the Declaration on the Rights of Indigenous Peoples last week despite objections from Australia, the United States, Canada and New Zealand, who said it was incompatible with existing laws.

Indigenous Affairs Minister Mal Brough said the declaration, if Australia had ratified it, would have given Aborigines veto powers over Parliament, made traditional law superior to national law and created the potential for indigenous compensation claims over land.

"The rights that would have been conferred upon some Australians over others as a result of this declaration ... would have done more to split Australians and to damage reconciliation, and to put one group of Australians in a privileged position over and above others," Brough told Parliament.

However, the opposition Labor Party has promised to sign the declaration if it wins elections, due to be held later this year.

A statement from the Labor Party's Indigenous Affairs spokeswoman, Jenny Macklin, said the declaration was not legally binding and did not override Australian law.

"This is a statement of in-principle support by the international community for improving the lives of indigenous people and their children," Macklin said.

The U.N. General Assembly approved the declaration Thursday by a vote of 143-4, with 11 abstentions. Countries that opposed it are not obliged to abide by it.