Iran’s President Mahmoud Ahmadinejad appealed to the American people during a live Q-and-A television show, saying his country's wanted peace and friendship with the U.S. despite mounting tensions between the two countries, the official IRNA news agency reported Monday. 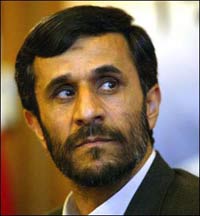 "Our message to the American nation is a message of peace, friendship, brotherhood and respect for humans," the agency quoted Ahmadinejad as saying in on the state-owned Jame Jam satellite TV channel late Sunday. The TV station, which is broadcast in Farsi from Tehran, is shown outside Iran and caters to Iranians living abroad.

But Ahmadinejad also called on the U.S. to leave Iraq, saying its presence there was proof that Washington wants to plunder Iraqi resources, because the Bush administration could not prove claims that Saddam Hussein was secretly storing weapons of mass destruction.

"If the U.S. leaders allow, then the situation of this country - Iraq - will be different," Ahmadinejad was quoted as saying.

Ahmadinejad's comments comes at a time of heightened tensions between Iran and the United States. Washington was angered by Tehran's arrest earlier this year of four Iranian-Americans accused of plotting against the government. Iran, meanwhile, has protested the detention of eight Iranians by U.S. forces in Iraq.

Despite Ahmadinejad's frequent anti-U.S. rhetoric, he has tried to appeal to the American people since he came to power in 2005. He opposed a law that imposed fingerprinting Americans upon their arrival in Iran and proposed direct flights between the two countries. But he failed to see both his wishes realized. Ahmadinejad has also sent letters to the American people, in which he criticized Bush's Middle East policy.

Iran and the U.S. have not had diplomatic relations since Washington cut its ties with Tehran after Iranian students stormed the U.S. Embassy in Tehran in 1979.