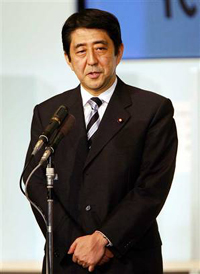 The scramble to replace Japan's hospitalized prime minister settled on Friday into a contest between a dovish ruling party stalwart who favors warmer relations with Asia, and a stout conservative with ties to the outgoing government.

Aso, 66, a comic book buff whose acerbic comments about China have drawn protests from Beijing, had been the presumed front-runner. But Fukuda, 71, a dovish critic of Abe's government, gathered enough support Friday from key ruling party figures to mount a serious challenge.

Abe, 52, abruptly announced on Wednesday he would resign, shocking his own party and throwing Japanese politics into confusion. The uncertainty spiked on Thursday when he was hospitalized for psychological stress and exhaustion.

Aso and Fukuda are running for ruling Liberal Democratic Party president on Sept. 23. The winner of that contest is assured election as prime minister by the parliament because of the LDP's vast majority in the powerful lower house.

It was unclear if any other ruling party members would run.

"This is an emergency situation, so I will do what I must do," Fukuda told supporters at a Tokyo hotel. "I have a strong sense that I should do this for the country to move Japanese politics forward."

Aso, meanwhile called for an "open election," referring to criticism that the selection of the next prime minister was essentially a matter of negotiation between ruling party factions, rather than democratic contest.

"We want to announce our policies to the people of Japan and the members of the party," Aso told supporters. "It is my duty to shed the image that the LDP is going backward."

The two are battling to lead a ruling party in crisis.

Abe took office a year ago with a bold plan to boost Japan's global role and roll back the country's postwar pacifist policies, but his government quickly foundered on a series of scandals and gaffes.

Four of his Cabinet ministers had to quit, and one committed suicide. The LDP lost big in July 29 elections, ceding control over the upper house of parliament to the opposition led by the Democratic Party of Japan.

The prime minister also jumped ship ahead of a major struggle in parliament over the extension of the country's naval mission to the Indian Ocean to refuel ships in support of U.S.-led forces in Afghanistan. The mission expires Nov. 1.

Aso and Fukuda have some things in common: both are longtime LDP officials and both come from a line of politicians. Fukuda's father was Prime Minister Takeo Fukuda, and Aso's grandfather was Shigeru Yoshida, a pivotal premier from the 1950s.

Ideologically, however, they tread different paths.

Aso hews to sharply conservative views, and once suggested that Taiwan benefited from being colonized by Japan in the first half of the 20th century. He angered Beijing by saying that China was a military threat.

It is unclear whether the two would approach the Afghan mission differently, since the policy was begun under Abe's predecessor, Junichiro Koizumi, whom Fukuda served as chief Cabinet secretary.

While Aso had been considered the front-runner, Fukuda collected support from Foreign Minister Nobutaka Machimura, and reportedly from Koizumi, who still commands a loyal following in the party. Finance Minister Fukushiro Nukaga gave up his own plans to run to throw his backing to Fukuda.

The leadership upheaval comes as the ruling party is facing increasing calls for snap elections in the lower house.

Democratic Party of Japan leader Yukio Hatoyama said it was fruitless at this point to allow the LDP to choose the next premier on its own.

"The prime minister will not have the mandate of the people," Hatoyama told reporters. "We should hold elections as soon as possible to judge the will of the public."

Fifty percent of respondents to an Asahi newspaper poll also favored a lower house election - up 11 percentage points from a previous poll at the end of July. The poll of 1,029 people said 41 percent supported the opposition, and 33 percent favored the LDP.

Meanwhile, about 28 percent of respondents to the Kyodo poll said they think Fukuda would be the most appropriate choice as prime minister, while 18.7 percent supported Aso. Respondents were asked to choose from a list of the LDP politicians. Kyodo interviewed 1,059 eligible voters Thursday and Friday by telephone.

No margin oferror was provided in either poll.

Chief Cabinet Secretary Kaoru Yosano, meanwhile, attempted to calm jitters by assuring reporters that Abe would hold power until a successor takes charge, despite spending the next couple of days in the hospital.