French President Nicolas Sarkozy visits Hungary on Friday, his first trip in preparation for France's presidency of the European Union in the second half of 2008. 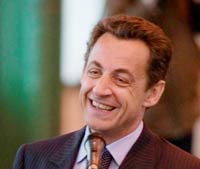 According to French and Hungarian government officials, Sarkozy is expected to focus on Franco-Hungarian relations, the future of the European Union and current issues such as the situation in Kosovo and the bloc's energy supplies.

Sarkozy will meet with President Laszlo Solyom and Prime Minister Ferenc Gyurcsany and give a speech in Parliament.

He is also scheduled to visit a construction site of Budapest's fourth subway line, in which two French companies - Alstom and Vinci - are involved, and meet with members of Hungary's French community.

Sarkozy, whose father Pal is Hungarian, traveled to the country as budget minister in 1994 and again in 2004 as finance minister. He has also been there at least once on a personal visit.

"You can imagine that I arrive today in Hungary as head of state with deep emotions," Sarkozy was quoted as saying in an interview published in Friday's edition of the Nepszabadsag newspaper.

"Beyond the personal aspects, I would like to shape the age-old relations formed by history between Hungary and France so that they are rooted in the present and point decisively toward the future."

The previous visit to Hungary by a French president was by Jacques Chirac in February 2004.