A fourth suspect arrested in connection with an online threat against Austria and Germany. 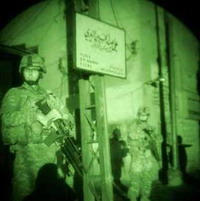 The arrest was made in the Mauricie region of Quebec on Wednesday, Austrian Interior Ministry spokesman Rudolf Gollia said. He identified the suspect as a man with African roots, but declined to provide more details.

Austrian and Canadian authorities had worked together closely for several weeks, Gollia said, adding that it appeared that the man had been planning to leave Canada.

"The individual who was arrested in Mauricie is going to be charged with conspiracy," Kenny said.

On Wednesday, Austria's Interior Ministry said three alleged al-Qaida sympathizers - two men and a woman, all Austrian citizens in their 20s and of Arab origin - were arrested in connection with a video that surfaced in March threatening to attack Germany and Austria unless the two nations withdrew their personnel from Afghanistan.

Germany has about 3,000 troops serving with the NATO-led security force in Afghanistan, but Austria sent just four liaison officers to the country.

Austrian Interior Minister Guenther Platter told reporters Wednesday there was no discernible plot in the works to carry out an attack in Austria, though he said the prime suspect had looked into acquiring explosives.

Authorities said they had the three Austrian suspects under surveillance for months and arrested them after it appeared they were preparing to leave the country.

Gollia said the prime suspect wanted to leave the country in the coming days to go on a honeymoon trip with his new wife, the woman in the trio. The tickets had been issued, he said.

Also Thursday, SITE Intelligence Group, which monitors al-Qaida messages, said its research suggested one of the three suspects arrested in Vienna was a leader of the Global Islamic Media Front, an al-Qaida propaganda group increasingly tied to terrorism operations.

The prime suspect traveled to Iraq in 2003 and was also the head of an Islamic youth group in Austria.