Actor George Clooney thinks that Sudanese president's visit to Italy may ease the plight of the millions who have fled their homes in Darfur. 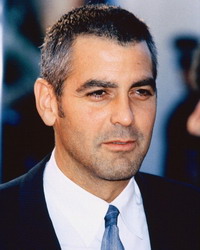 "The policy of not talking to them because they're unsavory hasn't been very effective," Clooney said in a telephone interview with The Associated Press.

"So my hope is that having a conversation with this man can somehow further movement toward getting these people back into their homes, their villages."

President Omar al-Bashir has meetings scheduled Friday with Italian Premier Romano Prodi and Pope Benedict XVI. The rare visit to the West has drawn criticism from the human rights group Amnesty International and some European parliamentarians who say Italy shouldn't receive a man implicated in genocide in the Sudanese region of Darfur.

More than 200,000 people have died and 2.5 million have been uprooted since ethnic African rebels in Darfur took up arms against the Arab-dominated Sudanese government in 2003. Sudan's government is accused of retaliating by unleashing a militia of Arab nomads known as the "janjaweed," a charge Khartoum denies.

Clooney, who has raised money and campaigned for increased international attention for Darfur, acknowledged that al-Bashir could use the meetings as a publicity stunt.

"At some point, it is a publicity stunt," he said, speaking from New York. "But if it moves things forward and brings it (the situation) into the mainstream, he can't turn a blind eye to what's happening in his country."

Clooney pointed to recent steps in the right direction, citing the U.N. Security Council resolution authorizing a U.N.-African Union peacekeeping force for Darfur and a planned peace conference between Darfur rebel groups and the Sudanese government next month.

"Our hope is that if we can have some conversations with this guy, then we can get this thing to move much quicker," Clooney said. "So whatever it takes: There are 2.5 million people who could very easily die, and I'm concerned with their lives more than anything."

Clooney, who has a villa on Lake Como, co-founded a humanitarian organization called Not On Our Watch with his "Ocean's Thirteen" co-stars Brad Pitt, Matt Damon and others to focus global attention on the plight of Darfur's people. They have raised more than US$9.3 million for humanitarian efforts in the region.