Third of the American public satisfied with Bush, AP says

A poll by The Associated Press and Ipsos said Thursday that only a third of the American public is satisfied with the job President George W. Bush is doing and even fewer with Congress. 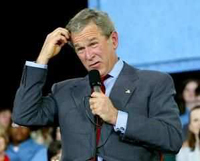 Third of the American public satisfied with Bush, AP says

With the clash between Bush and congressional Democrats over Iraq continuing to dominate the news, 33 percent said they approve of Bush's performance. That essentially matched his all-time low of 32 percent measured several times in the AP-Ipsos survey, a level that has barely changed since late last year.

Bush's approval on various issues ranged from 40 percent on foreign policy and terrorism to 33 percent on Iraq. But he wasn't the only one whose popularity was in the doldrums.

Congress' 26 percent approval was also about the same as its 24 percent low point since Democrats took control from Republicans this year, which came in July.

The survey was conducted Sept. 10 to 12, and involved telephone interviews with 1,000 adults. It had a margin of error of plus or minus three percentage points.