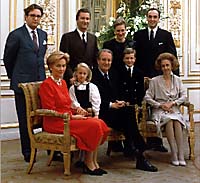 An information by a television investigation into the monarch's finances that King Albert II had amassed a private fortune of up to EUR2 billion (US$2.8 billion) was denied Thursday by Belgium's royal palace.

The documentary said it was unclear how rich Albert is but cited royalty watchers who suggested he was worth between EUR200 million (US$278 million) and EUR2 billion.

"Nobody knows how much money the king has," headlined daily De Morgen, over a story that dominated newspapers following Wednesday's screening of the documentary on the French-language public broadcaster RTBF.

Newspaper reports, suggesting the king was hiding his personal wealth from the public, came as Albert struggles to end a national political crisis that threatens his reign and has left the country without a new government since national elections on June 10.

Palace spokesman Pierre-Emmanuel De Bauw told daily La Libre the claims were "a fantasy" and the monarch is worth only EUR12.4 million (US$17 million) - the amount the king gets from the state every year to pay for the royal family, its palaces, staff, trips and hosting receptions.

"All other estimates as to the personal holdings of the king are made up," De Bauw told daily De Standaard.

He said the inflated figure could include state-owned palaces in Brussels and the king's official residence at the palace in Laeken.

Albert gets around EUR9.5 million (US$13.2 million) of the EUR12.4 million annual stipend from the government with the rest going to other members of the family, including Crown Prince Phillipe and Queen Fabiola.

Media reports suggested Albert and his family benefited from investments made by his royal predecessors in various Belgian banks, steel companies and refineries.

Following an outcry over media reports about the monarch's finances six years ago, the palace then made public a breakdown of annual grants and subsidies given to the royals.

Albert is trying to mediate between political parties to end the crisis which has led to calls from extremist parties for the break-up of the country, which could spell the end of Albert's reign.

The bid to form a government remains deadlocked because of disputes between Belgium's Dutch and French-speaking halves nearly 100 days after elections.

The royals have long been seen as the glue that keeps the linguistically divided country together. Albert has routinely called on political leaders to show unity to keep Belgium together.