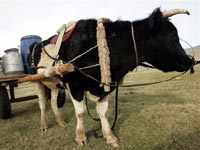 The British government had not announced the results of tests on the strain detected on Wednesday, but Scottish Environment Secretary Richard Lochhead - seeking to reassure Scots that the outbreak was isolated to the south - said tests indicated the strain was the same type as the previous outbreak.

"If it hadn't been the same strain as the previous outbreak, that would lead to a lot more questions," Lochhead told British Broadcasting Corp. Radio in Scotland, saying he was hopeful the outbreak could be contained in southwest England.

The Department for Environment, Food and Rural Affairs, or DEFRA, would not immediately confirm the strain of the disease. Britain's Agriculture Secretary Hilary Benn said the government expected to announce the test results later Thursday.

"The question of course is whether this is in effect a continuation of the previous outbreak," Benn said in an interview on BBC radio.

The highly contagious disease was found Wednesday in cattle grazing in the county of Surrey, about 10 miles (15 kilometers) from the laboratory that was linked to the August outbreak. The discovery, coming just days after the government declared the outbreak over, alarmed farmers who lost millions in revenue last month.

The confirmation of foot-and-mouth disease "is a hammer-blow to the industry which has left livestock farmers stunned," National Farmers' Union President Peter Kendall said.

The government set up a 6-mile (10-kilometer) radius surveillance zone around the farm near in Egham, which includes Heathrow Airport and Queen Elizabeth II's Windsor Castle. Egham is 25 miles (40 kilometers) from London.

The queen is staying at her Scottish retreat at Balmoral. However, if she were to return to Windsor under the current restrictions she would not be able to ride horses or let her dogs off their leashes, the Crown Estate said.

"That is the rule and it will apply to everyone," a spokesman said on condition of anonymity in line with estate policy.

The August outbreak was centered near the government-funded Institute for Animal Health, a diagnostic laboratory, and vaccine maker Merial Animal Health, a British unit of the U.S.-French pharmaceutical firm Merial Ltd.

The government imposed a nationwide ban on all livestock movement, and ordered the slaughter of 300 cattle and pigs in the affected area, said Britain's chief veterinary officer, Debby Reynolds.

The European Union imposed its own ban on livestock movements from Britain.