Ireland’s Prime Minister Bertie Ahern, who admits receiving a string of cash payments from businessmen, denied doing anything wrong when he began testifying Thursday to an anti-corruption judge probing his foggy financial past. 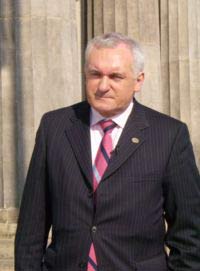 At stake are the reputation and legacy of Ahern, Ireland's popular leader since 1997 - the same year he authorized a judicial probe into a culture of bribery involving some of Ireland's top politicians, lobbyists and property developers.

That marathon investigation, led by Justice Alan Mahon, has spent years trying to get to the bottom of allegations that Ahern himself took money during his 1990s time as Ireland's finance minister and rising power-broker inside Fianna Fail, Ireland's dominant and most ethically troubled party.

In an opening statement, the 56-year-old Ahern denied ever taking bribes. "I have done nothing improper. I have done no wrong," he said.

His lawyers tried to stop the Mahon probe from publicly investigating his financial records at all. They successfully delayed Thursday's start of testimony until after the May national election, when Fianna Fail rolled to a third straight victory even as Ahern suffered a barrage of questions over his personal finances.

Details of Ahern's receipt of unexplained cash payments were leaked last year to The Irish Times, Ireland's newspaper of record, and forced Ahern to admit he received untaxed payments from at least 39 businessmen.

In his statement, Ahern said the pre-election leaks were "calculated to do me enormous personal and political damage."