Dominique de Villepin, ex-Prime Minister of France, was appearing Thursday before investigating judges for a new round of questioning. 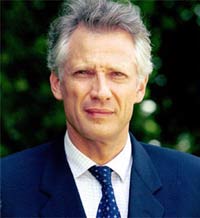 Villepin faces preliminary charges that include "complicity in slanderous denunciations" and "complicity in using forgeries," and could face up to five years in prison if convicted. He has vehemently denied the charges.

In an interview in Thursday's L'Est Republicain newspaper, Villepin said he had "nothing to reproach myself about in this affair," insisting "there was no political dimension" to the matter. Villepin, who was foreign minister and then interior minister during the events in question in 2003-2004, said he had acted in accordance with his responsibilities in both positions.

Villepin said he expected his responses to investigating magistrates Jean-Marie d'Huy and Henri Pons in Thursday's hearing would "throw a new light" on the matter.

The scandal unfolded after a judge received a mysterious, anonymously sent, computer disc accusing now French President Nicolas Sarkozy and other personalities of using a Luxembourg bank - Clearstream - to hide kickbacks from the sale of US$2.8 billion (EUR 2.1 billion) worth of French frigates to Taiwan in 1991.

The charges proved baseless and investigators turned their attention to finding out who had sent the disc.

Villepin came under suspicion of trying to smear Sarkozy by asking intelligence official Gen. Philippe Rondot to secretly investigate the affair. Villepin admits asking Rondot to investigate, but denies naming Sarkozy as a target or otherwise attempting to smear him.

However, traces of Rondot's erased computer files recovered by investigators earlier this year added fuel to the investigation. Rondot appeared to have written in the files that two key figures said Villepin _ acting on orders from then-President Jacques Chirac - told them to go public with the secret bank account list that named Sarkozy.

The investigators searched Villepin's home and office in July.

Under French law, preliminary charges mean an investigating judge has determined there is strong evidence to suggest involvement in a crime. The filing gives the magistrate time to pursue an investigation that can result in a trial or the dropping of charges.