Islamic militants tried to blow up an ancient statue of Buddha in northwestern Pakistan, officials and witnesses said. 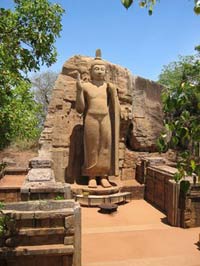 The attack echoed the Taliban's destruction of the famous Bamiyan statues in neighboring Afghanistan in 2001 and came as that country and Pakistan battle a surge in violence by extremists wanting to impose a harsh version of Islamic law.

The attempt to destroy the monument occurred in the small village of Jehanabad in North West Frontier Province, a stronghold of pro-Taliban militants that lies on the border with Afghanistan, officials said Wednesday.

A group of armed men arrived in the village late Monday saying they were mujahedeen, or Islamic fighters, and told residents they wanted to blow up the 7-meter (23-foot) statue, said villager Amir Khan.

"I told them that there are houses near to the rock and any blast could put our lives in danger, but they pointed their weapons at us," said Khan. "We heard the sound of drilling twice and then early Tuesday morning we heard two blasts."

The statue was undamaged, but some of the rock surrounding it was blown away, officials said.

"Luckily, the actual statue of the Buddha is safe," said Abdul Nasir, assistant curator of the museum in the nearby town of Swat. "Islam teaches us to respect other religions and faiths, but unfortunately some elements are disturbing the peace in the Swat valley."