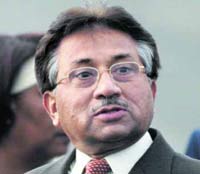 Provincial authorities have started releasing about 1,000 Sharif supporters rounded up in the days before his attempt to return from exile, Interior Ministry spokesman Brig. Javed Iqbal Cheema said Thursday.

Sharif's party claims about 5,000 were detained.

The president "wished every Pakistani to observe Ramadan with due solemnity and in true spirit of tolerance and forbearance," APP quoted a presidential spokesman as saying. Ramadan begins Friday in Pakistan.

Sharif's supporters were rounded up to prevent them from giving the former premier a rousing welcome at Islamabad airport. He flew in from London on Monday after seven years in exile, hoping to upset Musharraf's re-election plans. But he was quickly deported to Saudi Arabia.

The releases are unlikely to soften opposition calls for Musharraf, who toppled Sharif's government in a 1999 coup and became a key U.S. ally after the Sept. 11, 2001 attacks, to step down and restore civilian rule.

Sharif's party has already challenged his expulsion before the Supreme Court, which last month ruled that he had an "inalienable" right to return.

However, the president has removed a key political rival who had vowed to upset his plans to ask lawmakers to give him a new five-year term by mid-October.