Bush to appear in televised address hoping to buy more patience about U.S. troops in Iraq

U.S. President George W. Bush hopes to obtain more patience from politicians and the general public for the long-expected but yet unreal success in Iraq. Bush promised that the extra troops sent to Iraq would come back home next year if conditions allowed that. 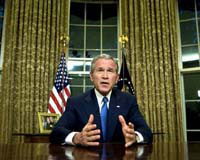 Bush to appear in televised address hoping to buy more patience about U.S. troops in Iraq

Bush plans to appear in a televised address to the nation Thursday night and deliver the 18-minute speech from the Oval Office about the need for more time in Iraq.

Not willing to wait, Senate Democrats were already discussing legislation to limit the mission of U.S. forces in Iraq. By limiting troops to training Iraq's military and police, protecting U.S. assets and fighting terrorists while not setting a deadline to end the war, Democrats hoped to attract enough Republicans to bring such a proposal to a vote.

The day after his televised address, Bush was expected to reinforce the message with remarks from a Marine base in Quantico, Virginia, just outside Washington, and with the White House's release of an Iraq status report required by Congress.

As part of the public relations flurry, Vice President Dick Cheney planned to travel to the Gerald R. Ford Presidential Museum in Michigan and MacDill Air Force Base in Florida. Iraq also was chosen as the topic for Bush's weekly Saturday radio address, and administration officials were being offered to television networks for Sunday news show appearances.

The full-throttle effort to get out Bush's message on Iraq reflects the high stakes for a president who lost his popularity and his party's control of Congress in large measure over the war and yet ordered 21,500 additional combat troops there in January to try to bring calm and give his goal of a stable, self-sustaining Iraq a chance. An additional 8,000 support troops soon followed.

Gradually phasing out that force escalation by next July - Bush's plan to be announced Thursday night - would still leave about 135,000 U.S. troops in Iraq. Democrats against the war were not at all satisfied.

"It creates and provides an illusion of change in an effort to take the wind out of the sails of those of us who want to truly change course in Iraq," said Democratic Sen. Carl Levin, chairman of the Armed Services Committee.

Democrats are under pressure from influential anti-war groups to use their new majority in Congress to end the war altogether. For now at least, they seem far from that goal, as their thin margin of control means they need Republicans' help for veto-proof votes on any legislation. Most Republicans remain reluctant to embrace calling troops home on a fixed, quick schedule.

This week's two days of testimony before Congress, in which the commander in Iraq, Gen. David Petraeus, and Ryan Crocker, the U.S. ambassador there, reported real though admittedly scattered progress in Iraq, only served to solidify positions.

The intense debate in Washington was not mirrored with similar intensity in Baghdad. There, the news that drastic troop reductions do not seem in the offing has meant the Shiite-led government feels little pressure to accelerate work toward true political reconciliation.

The president's latest approach matches Petraeus' recommendations for the force posture. What Bush is endorsing, however, represents only a slight hastening of the already scheduled end of the so-called surge.

Planned troop rotations call for the first of the additional troops sent this year to come back starting next spring, with all of them home by the end of next summer. That could change only if Bush and his team extend tour lengths or shorten home leave for replacements.

The plan Petraeus announced this week would instead have the first of the additional troops returning home this month, a 2,000-member Marine unit, followed by the mid-December departure of an Army brigade numbering 3,500 to 4,000 soldiers. The other four combat brigades would leave by July 2008 under an unspecified timetable. Also, Petraeus was not precise about whether all of the 8,000 support troops sent with those extra combat forces would be withdrawn by July.

The general cautioned against any talk before March of whether it would be wise to go below the pre-surge level of 135,000, and Bush is expected to endorse that idea. The president also will say that even ending the surge will depend on continued security gains and no unforeseen events that change the dynamic.

Bush was to focus on security gains made in recent months and, while acknowledging difficulties on the political front, tout some incremental political progress, especially in local areas. Continuing to capitalize on those gains now is not only crucial to the present and future security of the United States and the entire Middle East, he was to say, but will hasten the day when bigger numbers of American troops can come home.

The president was expected to talk candidly about the fact that few of the 18 benchmarks set by Congress and the White House to measure progress of the buildup have been met. But the administration has sought to deflate the importance of those benchmarks, which are required to be the focus of the Friday's report but which the White House now regards as offering an unrealistic or incomplete look at the situation.

Bush rehearsed his speech Wednesday in the White House theater and talked by phone with Petraeus and Crocker, thanking them for their service. White House aides also were reaching out to key foreign and domestic leaders to preview the broad outlines of the speech, but not its details.

As the president prepared, leading Senate Democrats huddled in Senate Majority Leader Harry Reid's office to discuss how to regain momentum in the debate. At issue was how far to go in forcing a new mission for troops without losing support from either anti-war stalwarts or moderate Republicans, according to congressional aides familiar with the meeting.

Petraeus, in testimony this week, argued against shifting troops from their current mission of securing the population and counterterrorism to one focused strictly on counterterror and training the Iraqi security forces.

Reid declined to discuss details of the plan on Wednesday, saying only that Democrats would offer four to six amendments "to change the course of the war" when the Senate takes up a defense bill next week.