Shinzo Abe, the Prime Minister of Japan was taken to hospital Thursday. Abe suffered psychological stress and exhaustion the day after announcing his resignation. 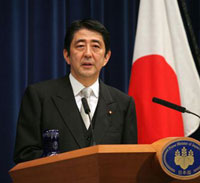 Toshifumi Hibi, a top doctor at Keio University Hospital, said Abe would stay at hospital for at least three or four days for treatment for gastrointestinal inflammation, exhaustion and other symptoms of stress.

"He is suffering from extreme exhaustion," Hibi said. "He has lost weight. Symptoms include abdominal plain, digestion problems and lack of appetite. These symptoms can be attributed to physical exhaustion and psychological stress."

Yosano said Abe had been receiving regular checks from his personal doctor since returning from a trip abroad over the summer.

"Mr. Abe has an illness that could cause him to feel unwell," Yosano said Wednesday. "His doctor determined that his fatigue level has reached its peak, so I think that the doctor concluded that he needed to be examined at a well-equipped hospital."

Shinzo Abe's resignation, meanwhile, left the troubled ruling Liberal Democratic Party to scramble for a replacement amid growing calls for a general election to give voters a role in choosing the new government.

The front-runner to replace Abe, former foreign minister and fellow conservative Taro Aso, was expected to announce his candidacy later Thursday. Kyodo News reported the Liberal Democratic Party would decide the election schedule on Thursday and campaigning could start as soon as Friday.

Calls for a snap election for the powerful lower house of parliament, which chooses the prime minister, gathered steam Thursday amid the confusion. The opposition took control of the upper house of parliament in elections on July 29, capitalizing on the unpopularity of Abe's scandal-scarred government.

"With the LDP government thrown into this much confusion, the voters should be asked in the proper fashion who their choice for leader is in a general election," said the national Asahi newspaper in an editorial. "That is the only way to bring back politics based on the people's trust."

Abe announced Wednesday he would resign, but his vague reasons for leaving - that he felt a new leader was needed to unite the ruling and opposition parties - and the awkward timing, fueled speculation he was forced out by the LDP leadership and suffered from health troubles.

NHK also reported Abe has suffered from loss of appetite, and had to go on an intravenous drip in the past. The report, which cited unidentified sources, said Abe had been unable to eat anything but rice gruel.

Abe, whose support ratings in opinion polls had sagged to about 30 percent, has not yet announced a date for his departure.

When he steps down, he will leave behind a government known for scandals and gaffes. He is also leaving amid a political brawl over the country's aid to U.S.-led forces in Afghanistan.

Four of Abe's Cabinet ministers have resigned in scandals, including one who quit this month just a week after being appointed. An agriculture minister committed suicide over a money scandal in May.

The Liberal Democratic Party said it would use a streamlined election process to choose his successor as party president, reportedly on Sept. 19. The party leader is guaranteed election as prime minister because the party controls parliament's lower house.

The leadership change came as the government opened its battle in parliament over the Indian Ocean naval mission, which the opposition has vowed to defeat.

Japan's navy has been providing fuel for coalition forces in Afghanistan since November 2001 under an anti-terrorism law that has already been extended three times. The legislation is a key issue before the special parliament session that opened Monday.