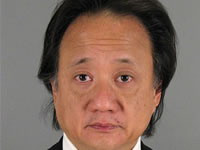 The Hong Kong-born Hsu had been scheduled to appear in a California court last week to turn over his passport and discuss reducing the $2 million (1.44 million EUR) bail he posted related to a 15-year-old arrest warrant connected to his 1992 felony theft conviction. Instead, he skipped town and a judge issued a new arrest warrant for him.

Hsu appeared suddenly in the New York political scene about four years ago, spreading hundreds of thousands of dollars in campaign contributions to Democratic candidates around the U.S.

According to court documents, a tipster on Sept. 6 told the FBI in San Francisco that Hsu was in the emergency room at a hospital in Colorado.

Hsu is in good condition at the hospital, where he is under guard. He was arrested last Thursday at the hospital after he was taken from an eastbound Amtrak train for treatment of an undisclosed ailment.

Officials said they did not know when he might be released from the hospital and transferred to the county jail.

A spokesman for Hsu said he had not spoken with him.

Hsu raised hundreds of thousands of dollars for Democratic candidates and groups until his 1992 theft conviction, for which he pleaded no contest, came to light. Many of those candidates, including Democratic presidential hopeful Senator Hillary Rodham Clinton, have announced plans to return or donate to charity Hsu's election contributions.

Hsu had spent 15 years running from the 1991 theft conviction until he surrendered to authorities Aug. 31.

Prosecutors say Hsu bilked investors out of $1 million (720,000 EUR) by telling them he had a contract to buy and sell latex gloves, but he never purchased the gloves and had no contract to sell them.

Hsu has said he believed he had resolved his legal issues, but that he would halt his work raising political money.