The parents of missing 4-year-old Madeleine McCann await charges against them. 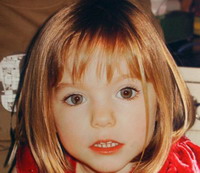 Portuguese police said they expected to on Tuesday to hand-deliver the results of their investigation into the girl's disappearance May 3 from a hotel in southern Portugal. Police named Kate and Gerry McCann as suspects Friday.

"We planned to get it in today (Monday), but after all it'll be delivered tomorrow morning," police spokesman Olegario Sousa said.

Portimao District Attorney Jose Cunha de Magalhaes e Meneses will then review the case files, which contain detail of forensic evidence, and police interviews with the McCanns are expected to come in more than a half-dozen volumes, each containing about 200 pages.

The McCanns, who returned to Britain on Sunday with their 2-year-old twins, kept a low profile Monday, avoiding reporters camped outside their home.

Philomena McCann, Gerry's sister, accused the police of "clutching at straws" to clear the case up.

"Kate and Gerry have been a thorn in their sides for a long time. What better than to cast them as the villains?" she told GMTV.

"It is unbelievable they have been named as suspects - no one believes the Portuguese police," she said.

The McCanns, who are both medical doctors, have hired a high profile legal team that includes Michael Caplan, who represented former Chilean dictator Gen. Augusto Pinochet when Spain tried to extradite him from Britain in 1999.

However, it could be hard to challenge any attempts by Portugal to extradite the McCanns because of the cross-border European Union Arrest Warrant introduced in 2004 to make it easier for people accused of serious crimes to stand trial in other EU countries.

The administrators of a 1 million pound fund (US$2 million, 1.5 million EUR) set up to help find Madeleine were investigating whether some of the money could be used to help pay the McCann's legal bills, Britain's Press Association quoted an unidentified family friend as saying.

Police spokesman Olegario Sousa said he expected the public prosecutor to "quickly decide" on what action to take. The public prosecutor's office determines whether charges should be brought against anyone, whether further investigation is required, or if the case should be dropped.

Madeleine's disappearance, and her parents' publicity campaign to find her, has attracted worldwide attention. The story took a startling twist Friday when Portuguese police formally named them as suspects.

Until Friday, suspicion had centered on Robert Murat, a British man who lived near the hotel from which Madeleine disappeared and who was the only formal suspect. He has not been charged, and he has said he is innocent.

Gerry McCann said Sunday it was "heartbreaking" to come home without Madeleine, despite an extensive effort to find her. His voice shaking, he said "it does not mean we are giving up the search for her."

"We have played no part in the disappearance of our lovely daughter Madeleine," he said.

In an interview with the Sunday Mirror, Kate McCann said Portuguese police had pressed her to confess that she had killed Madeleine accidentally, then hid her body and pretended that the girl had been abducted in a massive cover-up. She accused police of telling her that if she pleaded guilty she would only face a two or three year suspended sentence.

"They want me to lie. I'm being framed," she was quoted as telling the newspaper after her first police interrogation.

Although Portuguese police named the McCanns suspects, they did not confiscate their passports or restrict their movements.

Gerry McCann said he and his wife had returned home "with the full agreement of the Portuguese authorities and police."

The McCanns say Madeleine vanished from a hotel room in Portugal's Algarve region, where she and her siblings were sleeping, while her parents ate dinner at a nearby restaurant.

The case took a turn in recent days, after police said forensic tests on evidence gathered months after the girl vanished found traces of blood in the couple's car. The traces, apparently missed in earlier tests, were uncovered by sniffer dogs brought from Britain.

The couple's ordeal has drawn attention around the world, partly because of an international campaign they led to find their daughter.

The McCanns have toured Europe with photos of Madeleine and the child's stuffed animals and clothing, even meeting with Pope Benedict XVI at the Vatican. Celebrities including children's author J.K. Rowling and soccer star David Beckham made public appeals that helped the family raise money for their fund.