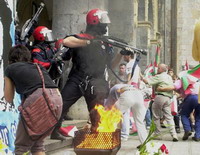 The failed attack came just hours after ETA, which called off a cease-fire in June and resumed full-scale attacks in late August, warned in a statement it would continue to hit targets of the Spanish state.

The stolen compact car containing around 60 kilograms (130 pounds) of explosives was parked outside a Defense Ministry building in the city of Logrono and was timed to go off late Sunday night, the Interior Ministry office in Logrono said.

Police cordoned off the area after a warning call was received in the Basque region. Around 11:30 p.m. (2130 GMT) the bomb's detonator went off, but the explosives failed to ignite. Bomb-disposal experts took about eight hours to defuse the bomb, said Jose Antonio Ulecia, the Spanish Interior Ministry's top representative in La Rioja.

Juan Mari Olano, one of nine demonstrators arrested in the Basque city of San Sebastian on Sunday amid violent clashes with police for trying to hold an illegal rally in support of ETA prisoners, was detained for questioning by anti-terror judge Baltasar Garzon at the National Court in Madrid, the court said Monday in a statement. The other detainees were released.

"Once again ETA has chosen the path of violence, and they should know that this path is the path toward its dissolution, one which will only lead to jail," Deputy Interior Minister Antonio Camacho told a news conference in Madrid.

ETA called what it said was a permanent cease-fire in March 2006, but grew frustrated with a lack of government concessions in ensuing peace talks. The group set off a huge bomb in a parking garage at Madrid's airport on Dec. 30, killing two people. The government, which hours before had declared the peace process healthy, called off the negotiations.

ETA insisted that the airport deaths were unintended, and that the truce remained in effect. But it declared the cease-fire formally over in June, and on Aug. 24 ETA detonated a powerful bomb outside a police station and barracks in the northern city of Durango, slightly injuring two officers.

With Sunday's bomb, the government has now thwarted five attempted attacks since ETA announced the end of the cease-fire.

ETA, whose name stands for Basque Homeland and Freedom, has been waging a violent campaign that has killed more that 800 people since the late 1960s. Its aim is to carve out an independent Basque state in parts of northern Spain and southwestern France.