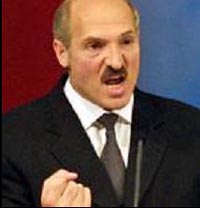 Authorities have arrested two dozen opposition demonstrators outside a court in western Belarus Monday where a youth activist went on trial for membership in an unregistered organization.

About 40 opposition activists rallied outside the court, carrying placards reading "Freedom to Political Prisoners!" and "No to Repression!"

The rally coincided with the beginning of the trial of Yaroslau Hryshchenya. Authorities have refused to register his group, Youth Front. The trial is taking place in Baranovich, 150 kilometers, or 93 miles, southwest of Minsk.

After the activists started yelling anti-government slogans, police encircled the group and arrested 22 of them, said Tatyana Protko, leader of the Belarusian Helsinki Committee, a human rights group.

"The authorities are afraid of solidarity and that's the only way this aggression and all these new arrests can be explained," she said.

In the 13 years he has been in power, President Alexander Lukashenko has made Belarus into one of Europe's most repressive societies, quashing dissent and closing down opposition media. The United States and European Union have imposed sanctions on him and top officials over their treatment of opponents.

Before the March 2006 elections Lukashenko pushed through legislation criminalizing participation in unregistered organizations, such as Youth Front. Several of the group's activists have been convicted and sentenced to prison terms for membership in the group.