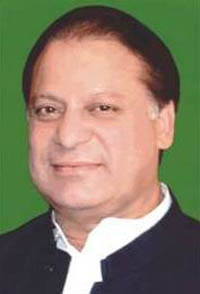 Former Pakistani Prime Minister Nawaz Sharif arrived in Saudi Arabia hours after he was was deported from his country.

A diplomat based in Saudi Arabia said Saudi officials, whom he did not name, received Sharif at Jiddah's royal terminal, where his plane landed. The diplomat gave the information on condition his name and nationality not be identified.

Sharif was whisked away in a convoy that was seen driving fast from the airport.

Pakistani authorities deported Sharif shortly after he landed in Pakistan from seven years in exile hoping to campaign against the country's U.S.-allied military ruler.

About four hours after he arrived in Islamabad on a flight from London, Sharif was taken into custody and charged with corruption, but was then quickly spirited to another plane and flown Jiddah, according to a close aide to President Gen. Pervez Musharraf.

Sharif's government was ousted by Musharraf in a 1999 coup. Seven years ago, Sharif was sent into exile in Saudi Arabia after he was convicted of terrorism and hijacking charges in Pakistan following the coup. Under a deal with Musharraf, Sharif allegedly promised to stay away for 10 years.

Saudi intelligence chief Prince Muqrin bin Abdulaziz Al Saud said Saturday in Islamabad that Sharif should respect the agreement and that Saudi Arabia was ready to take him back.

But last month, Pakistan's Supreme Court ruled that Sharif - the son of a wealthy industrialist who has remained a key political player despite his years in exile - had the right to return home.