Nawaz Sharif - the former Prime Minister of Pakistan - landed at Islamabad airport on Monday. Sharif’s arrival, whose elected government was ousted by Musharraf in a 1999 coup, is likely to sharpen political tensions ahead of presidential and legislative elections and may trigger street violence in the volatile country. 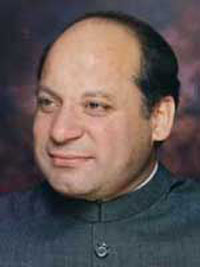 As his supporters battled police blocking roads leading to Islamabad airport, black-uniformed commandos entered the Pakistan International Airlines jetliner soon after it landed and surrounded Sharif, an Associated Press reporter on board said.

After 1-1/2 hours of negotiations, Sharif disembarked the plane and entered the airport building, an airport official said on condition of anonymity because he was not authorized to speak to media.

Pakistan's Geo TV network reported that the arrivals lounge of the airport had been evacuated. Other networks reported that phone jammers were in operation at the airport, and 1-1/2 hours after he landed, Sharif's fate remained unclear.

Police arrested leading supporters of Sharif and clashed with rock-throwing protesters on roads to the airport, an AP reporter said. Roads had been blocked by trucks, tractors and barbed wire barricades.

"We wanted to get to the airport to welcome the person who has challenged the dictator," said Asif Ali, one of the Sharif supporters. "We were tear-gassed and baton-charged." Several people were injured, witnesses said.

Former President Rafiq Tarar, a strong Sharif loyalist, said he was roughed up in one confrontation. He declared the government was "anti-Pakistan." Witnesses said Tarar was later arrested.

The showdown could further weaken Musharraf's faltering grip on power and comes as the country battles surging Islamic extremism that has spread from the Afghan border, where Osama bin Laden and other al-Qaida leaders are believed to be hiding.

"We are going, nothing can stop us," Sharif told reporters at London's Heathrow airport before boarding his flight. He said he expected Musharraf to invoke emergency powers to stop his supporters in Pakistan - but that this only underscored the need for him to return and fight to restore full democracy and the power of the judiciary. "We are not scared of anything - prisons and jails we have gone through all that," Sharif said.

Sharif earlier said he had planned to travel in a motorcade to his home and political base in Lahore, about 290 kilometers (180 miles) to the south. The trip through Punjab province could take three days as he greets supporters along the way, Sharif's party said.

Analysts say Sharif's return could crank up the pressure on Musharraf and upset talks on a power-sharing pact with his longtime rival Benazir Bhutto, another exiled former premier plotting a political comeback.

Musharraf wants to win a new five-year presidential term from lawmakers by mid-October, while both Sharif and Bhutto want to contest general elections due by mid-January 2008.

Musharraf, who has received billions of dollars in U.S. aid to help in the country's fight against al-Qaida, has seen his popularity shrink since his failed attempt to fire Chief Justice Iftikhar Mohammed Chaudhry earlier this year spurred calls for an end to military rule.